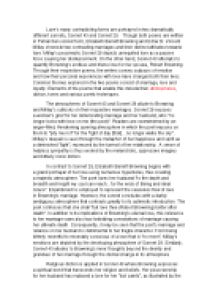 The atmospheres of Sonnet 43 and Sonnet 29 allude to Browning and Millays outlooks on their respective marriages.

﻿Love?s many contradicting forms are portrayed in two dramatically different sonnets, Sonnet 43 and Sonnet 29. Though both poems are written in Petrarchan sonnet form, Elizabeth Barrett Browning and Edna St. Vincent Millay chronicle two contrasting marriages and their distinct attitudes towards love. Millay?s pessimistic Sonnet 29 depicts unrequited love as a passive force causing her disillusionment. On the other hand, Sonnet 43 attempts to quantify Browning?s endless and divine love for her spouse, Robert Browning. Through their respective poems, the writers convey outpours of emotion and how their personal experiences with love have changed both their lives. Common themes explored in the two poems consist of marriage, love and loyalty. Elements of the poems that enable this include their atmospheres, diction, tones and various poetic techniques. ...read more.

Enjambment is employed to represent the ceaseless flow of love in Browning?s marriage. However, the sonnet concludes with a darkly ambiguous atmosphere that contrasts greatly to its optimistic introduction. The poet confesses that she shall ?but love thee (Robert Browning) better after death?. In addition to its implications of Browning?s eternal love, this reference to her marriage vows also has forbidding connotations of marriage causing her ultimate death. Consequently, it may be seen that the poet?s marriage and reliance on her husband is detrimental to her fragile character. From being bitterly resentful to miserably conscious of a love that is ?no more?, Millay?s emotions are depicted by the developing atmosphere of Sonnet 29. Similarly, Sonnet 43 alludes to Browning?s inner thoughts beyond the divinity and grandeur of her marriage through the dismal change in its atmosphere. ...read more.

Contrastingly, Sonnet 29 directly confronts Millay?s husband using spiteful diction to convey her deep resentment for the state of her marriage. Rather than reciting, ?I love thee? like Browning in her Sonnet 43, Millay repeats, ?Pity me not? for the grievances in her marriage, thus evoking sympathy from readers. In comparison to Browning?s theory of love being an eternal, resilient force, Millay describes a relationship that is susceptible to external forces that surround it. ?As the year goes by?, the ?beauties? of her marriage have been overcome by a ?man?s desire?hushed so soon?. Her husband?s ?waning? loyalty and fickleness is exposed by the comparison of their relationship to an ?ebbing tide [that] goes out to sea? and never returns. Such negative diction alludes to the passive nature of Millay?s unrequited love as opposed to Browning?s prosperous, active affection for her husband. ...read more.