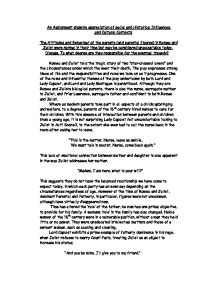 The attitudes and behaviour of the parents (and parental figures) in Romeo and Juliet were normal in their time but may be considered unacceptable today - Discuss - To what degree are they responsible for the eventual tragedy?

An Assignment showing appreciation of social and Historical Influences, and Cultural Contexts The Attitudes and Behaviour of the parents (and parental figures) in Romeo and Juliet were normal in their time but may be considered unacceptable today. Discuss. To what degree are they responsible for the eventual tragedy? Romeo and Juliet tells the tragic story of two "star-crossed lovers" and the circumstances under which the meet their death. The play expresses strong ideas of life and the responsibilities and roles we take on as it progresses. One of the roles and influential themes of the play undertaken by both Lord and Lady Capulet, and Lord and Lady Montague is parenthood. Although they are Romeo and Juliets biological parents, there is also the nurse, surrogate mother to Juliet, and Friar Lawrence, surrogate father and confident to both Romeo and Juliet. ...read more.

"This is the matter. Nurse, leave us awhile, We must talk in secret. Nurse, come back again;" This lack of emotional connection between mother and daughter is also apparent in the way Juliet addresses her mother. "Madam, I am here, what is your will?" This suggests they do not have the balanced relationship we have come to expect today, in which each party has an even say depending on the circumstances regardless of age. However at the time of Romeo and Juliet, dominant Parental and Fatherly, in particular, figures were not uncommon, although have virtually disappeared now. Time has altered the 'role' of the father, he now has one primal objective, to provide for his family. A womans 'role' in the family has also changed. ...read more.

When Juliet refuses to marry Count Paris a great rage erupts inside Lord Capulet. In his anger he displays a side of himself that today would cause outrage. He insults and wounds Juliet emotionally with insults such as; "Hang thee young baggage, disobedient wretch," This shows Lord Capulet's disregard for Juliet's feelings as if they were a burden. He also talks o Juliet as a curse; "And that we have a curse having her." However, initially Lord Capulet shows compassion towards Juliet, reluctant at first to marry her off to Count Paris. "But woo her, gentle Paris, get her heart," This is natural protective behaviour, and is perfectly acceptable in todays society. With this he introduced the quite modern concept of bridal choice and consent; "My will to her consent is but a part; And she agreed, within her scope of choice Lies my consent and fair according voice." In the time of Romeo and Juliet ...read more.