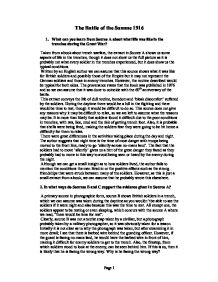 The Battle of the Somme 1916 - source related study.

The Battle of the Somme 1916 1. What can you learn from Source A about what life was like in the trenches during the Great War? Taken from a book about trench warfare, the extract in Source A shows us some aspects of life in the trenches, though it does not show us the full picture as it is probably not what every soldier in the trenches experienced, but it does show us the typical conditions. Written by an English author we can assume that this source shows what it was like for British soldiers and possibly those of the Empire but it may not represent the German soldiers and those in enemy trenches. However, the routine described would be typical for both sides. The provenance states that the book was published in 1976 and so we can assume that it was done to coincide with the 60th anniversary of the battle. This extract conveys the life of dull routine, boredom and 'bleak discomfort' suffered by the soldiers. During the daytime there would be a lull in the fighting and there would be time to rest, though it would be difficult to do so. This source does not give any reasons why it may be difficult to relax, so we are left to assume what the reasons may be. It is more than likely that soldiers found it difficult due to the poor conditions in trenches, with rats, lice, mud and the risk of getting trench foot. Also, it is probable that shells were being fired, making the soldiers fear they were going to be hit hence a difficulty for them to relax. There were great differences in the activities taking place during the day and night. The author suggests that night time is the time of most danger with troops being moved to the front line, ready to go 'silently across no-mans land'. ...read more.

It is possible that this photo was taken to show the public what war was like. On the other hand, the photographer could be trying to show that the soldiers were well taken for as many of the soldiers had bandages on them. Also, the crosses on them could be seen as telling the public that these men died for God. Although there are some dead in this source, it is relatively few compared to the number you would expect to see on a battlefield, implying that this area was not of a severe battle. Also, the area around the dead soldiers appears to be quite clean and sanitized, with many of them wearing bandages and some of them lying on stretchers. This suggests that this could be the hospital area where medical attention was given to wounded soldiers. On the battlefields, those who were too seriously injured were not really given much medical attention, as they were not expected to live and fight, so priority was given to those who were not so critically hurt and could go back to fighting. Therefore, we can assume that the soldiers in this photograph did not have grave injuries and were expected to fight again. From this we can say that there injuries probably did not kill them and it is likely that they died from an infection brought on by the unhygienic conditions surrounding them. Close inspection of this photograph shows that some of the soldiers have crosses on them. But why don't they have they all have crosses on them? A simple answer to this is that they were not all Christians, but it is likely that most of the Australians fighting in the Somme were Christians. So, another solution could be that they did not have enough crosses for those that died. This shortage of crosses implies that even the generals were not expecting so many deaths. ...read more.

Another person who felt in a similar way to Raws was Siegfried Sassoon, who has become well known for his anti-war poems, which he wrote as a soldier fighting in the war. Source J shows one of his poems 'The General', which was written in 1916 whilst serving on the Somme. The poem starts off in a cheerful tone, "Good morning; good morning! the General said", but very quickly changes its tone to become angry. "Now the soldiers he smiled at are most of them dead", suggests that Sassoon blames the generals for sending his friends to get killed. Referring to his superiors as "incompetent swine, Sassoon believed that they had poor tactics that were not planned properly, "he did for them both with his plan of attack", implying that these soldiers were as good as dead the minute the generals planned the attack. Written in 1916, this poem was not published until after the war, as he would never have been allowed to have it published during the war due to DORA censorship. However, if people were not meant to read it, why was it written? It is likely that Sassoon simply write it to let out the anger and bitterness he felt towards the generals. Although he fought in the war, after seeing many of his friends and comrades die, Sassoon later refused to continue fighting in the war. Although the reality of war was hidden from the public at home through censorship, propaganda and patriotic material, it could never be hidden from the many soldiers that watched their friends die around them. So, it is no wonder they blame their superiors for such incompetence. On the other hand the generals used the tactics they thought would work to win the war, but it seems they were unequipped to handle the war. However, they must have done some things right as Britain and its Allies did eventually win the war in November 1918, but as the great cost of 425,000 deaths on the Allies side. Page 1 ...read more.