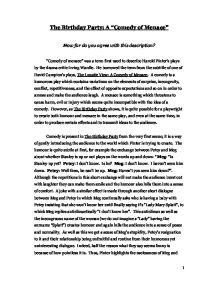 The Birthday Party, a comedy of menace (Pinter)

The Birthday Party: A "Comedy of Menace" How far do you agree with this description? "Comedy of menace" was a term first used to describe Harold Pinter's plays by the drama critic Irving Wardle. He borrowed the term from the subtitle of one of David Campton's plays, The Lunatic View: A Comedy of Menace. A comedy is a humorous play which contains variations on the elements of surprise, incongruity, conflict, repetitiveness, and the effect of opposite expectations and so on in order to amuse and make the audience laugh. A menace is something which threatens to cause harm, evil or injury which seems quite incompatible with the idea of a comedy. However, as The Birthday Party shows, it is quite possible for a playwright to create both humour and menace in the same play, and even at the same time, in order to produce certain effects and to transmit ideas to the audience. Comedy is present in The Birthday Party from the very first scene; it is a way of gently introducing the audience to the world which Pinter is trying to create. The humour is quite subtle at first, for example the exchange between Petey and Meg about whether Stanley is up or not plays on the words up and down: "Meg: "Is Stanley up yet? Petey: I don't know. Is he? Meg: I don't know. I haven't seen him down. Petey: Well then, he can't be up. Meg: Haven't you seen him down?". Although the repetitions in this short exchange will not make the audience burst out with laughter they can make them smile and the humour also lulls them into a sense of comfort. ...read more.

I'll kick the s***e out of him". Interestingly, Stanley seems to try to lighten the atmosphere with the joke ("Now you've both had a rest you can get out!") which causes McCann to say this, but he only succeeds in heightening the tense and menacing atmosphere of the scene. Again, humour does not take away from the threat but adds to it, making it worse. The fact that Stanley's joke doesn't lighten the scene as he hoped can also show the inadequacies of language. Indeed, one would not expect a joke to create more threats and menace. Thus, through the pairing of humour with menace Pinter shows the audience how words do not always achieve the desired effects and therefore is evidence of our own shortfalls as we do not always accomplish what we would like to through our speech. However, Goldberg does achieve what he wants to with his use of comedy and threats. This is because he wants to create a more menacing scene in order to completely destroy Stanley. His humour comes from the common expressions that he sometimes modifies, such as "You're beginning to get on my b*****s", and the different registers of these expressions, for example he says "Why are you driving that old lady off her conk?" which seems very colloquial compared to his normal speech. He also makes an ironic joke when he says that McCann is "the life and soul of any party", which is evidently false as the audience can tell that he isn't from how little he speaks. Goldberg's jokes contrast with the serious and controlling man who makes Stanley sit down simply by saying quietly "Webber. ...read more.

However, Pinter makes sure that some of the menacing atmosphere is elevated at times, which actually emphasises how strong this atmosphere is. The threatening ambiance is lessened by the use of humour. This humour can be found in the first dialogue between Goldberg and McCann, for example, when McCann says that Goldberg, who is obviously a Jew, is a "true Christian". There is also humour with the dialogue between Goldberg and Meg, after the first music hall scene, when he is admiring her dress and slaps her bottom, as well as before when he calls her a tulip and she asks "What colour?". Pinter uses comedy at these moments in the play in order to reassure the audience and to keep some suspense: if the whole length of the play was filled with a menacing atmosphere we would know that Stanley will lose the power struggle from the beginning. The humour also brings a certain level of normality back to the proceedings of the play so that the menacing atmosphere can increase slowly, again creating more suspense. Thus, I agree completely with the description of The Birthday Party as a "comedy of menace". While comedy and menace both appear separately in the play it is together that they affect the audience most. The association of two seemingly opposing themes in one play allows the audience to realise some of Pinter's preoccupations concerning the inadequacy of language but also its power, how we have some irrational fears concerning the unknown and the abnormal, how relationships work through manipulation and power struggles and the passivity of so many people throughout their lives. As well as this, the fact that we can associate these two terms, finding something menacing yet humorous at the same time, could also be a way for Pinter to show the paradoxical nature of human beings. ?? ?? ?? ?? 1 ...read more.