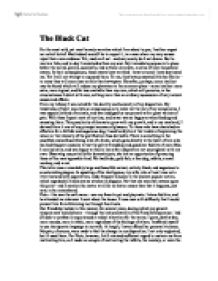 The Black Cat For the most wild, yet most homely narrative which I am about to pen, I neither expect nor solicit belief. Mad indeed would I be to expect it, in a case where my very senses reject their own evidence. Yet, mad am I not - and very surely do I not dream. But to-morrow I die, and to-day I would unburthen my soul. My immediate purpose is to place before the world, plainly, succinctly, and without comment, a series of mere household events. In their consequences, these events have terrified - have tortured - have destroyed me. Yet I will not attempt to expound them. To me, they have presented little but Horror - to many they will seem less terrible than barroques. Hereafter, perhaps, some intellect may be found which will reduce my phantasm to the common-place - some intellect more calm, more logical, and far less excitable than my own, which will perceive, in the circumstances I detail with awe, nothing more than an ordinary succession of very natural causes and effects. From my infancy I was noted for the docility and humanity of my disposition. My tenderness of heart was even so conspicuous as to make me the jest of my companions. I was especially fond of animals, and was indulged by my parents with a great variety of pets. With these I spent most of my time, and never was so happy as when feeding and caressing them. This peculiarity of character grew with my growth, and in my manhood, I derived from it one of my principal sources of pleasure. To those who have cherished an affection for a faithful and sagacious dog, I need hardly be at the trouble of explaining the nature or the intensity of the gratification thus derivable. There is something in the unselfish and self-sacrificing love of a brute, which goes directly to the heart of him who has had frequent occasion to test the paltry friendship and gossamer fidelity of mere Man. ...read more.

I approached it, and touched it with my hand. It was a black cat - a very large one - fully as large as Pluto, and closely resembling him in every respect but one. Pluto had not a white hair upon any portion of his body; but this cat had a large, although indefinite splotch of white, covering nearly the whole region of the breast. Upon my touching him, he immediately arose, purred loudly, rubbed against my hand, and appeared delighted with my notice. This, then, was the very creature of which I was in search. I at once offered to purchase it of the landlord; but this person made no claim to it - knew nothing of it - had never seen it before. I continued my caresses, and, when I prepared to go home, the animal evinced a disposition to accompany me. I permitted it to do so; occasionally stooping and patting it as I proceeded. When it reached the house it domesticated itself at once, and became immediately a great favorite with my wife. For my own part, I soon found a dislike to it arising within me. This was just the reverse of what I had anticipated; but - I know not how or why it was - its evident fondness for myself rather disgusted and annoyed. By slow degrees, these feelings of disgust and annoyance rose into the bitterness of hatred. I avoided the creature; a certain sense of shame, and the remembrance of my former deed of cruelty, preventing me from physically abusing it. I did not, for some weeks, strike, or otherwise violently ill use it; but gradually - very gradually - I came to look upon it with unutterable loathing, and to flee silently from its odious presence, as from the breath of a pestilence. What added, no doubt, to my hatred of the beast, was the discovery, on the morning after I brought it home, that, like Pluto, it also had been deprived of one of its eyes. ...read more.

"Gentlemen," I said at last, as the party ascended the steps, "I delight to have allayed your suspicions. I wish you all health, and a little more courtesy. By the bye, gentlemen, this - this is a very well constructed house." [In the rabid desire to say something easily, I scarcely knew what I uttered at all.] - "I may say an excellently well constructed house. These walls are you going, gentlemen? - these walls are solidly put together;" and here, through the mere phrenzy of bravado, I rapped heavily, with a cane which I held in my hand, upon that very portion of the brick-work behind which stood the corpse of the wife of my bosom. But may God shield and deliver me from the fangs of the Arch-Fiend! No sooner had the reverberation of my blows sunk into silence, than I was answered by a voice from within the tomb! - by a cry, at first muffled and broken, like the sobbing of a child, and then quickly swelling into one long, loud, and continuous scream, utterly anomalous and inhuman - a howl - a wailing shriek, half of horror and half of triumph, such as might have arisen only out of hell, conjointly from the throats of the dammed in their agony and of the demons that exult in the damnation. Of my own thoughts it is folly to speak. Swooning, I staggered to the opposite wall. For one instant the party upon the stairs remained motionless, through extremity of terror and of awe. In the next, a dozen stout arms were toiling at the wall. It fell bodily. The corpse, already greatly decayed and clotted with gore, stood erect before the eyes of the spectators. Upon its head, with red extended mouth and solitary eye of fire, sat the hideous beast whose craft had seduced me into murder, and whose informing voice had consigned me to the hangman. I had walled the monster up within the tomb! ?? ?? ?? ?? ...read more.