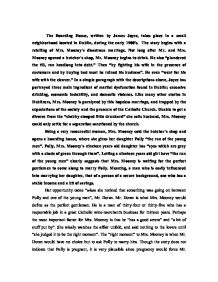 The Boarding House, written by James Joyce, takes place in a small neighborhood located in Dublin.

The Boarding House, written by James Joyce, takes place in a small neighborhood located in Dublin, during the early 1900's. The story begins with a retelling of Mrs. Mooney's disastrous marriage. Not long after Mr. and Mrs. Mooney opened a butcher's shop, Mr. Mooney begins to drink. He also "plundered the till, ran headlong into debt." Then "by fighting his wife in the presence of customers and by buying bad meat he ruined his business". He even "went for his wife with the cleaver." In a simple paragraph with the descriptions above, Joyce has portrayed three main ingredient of marital dysfunction found in Dublin: excessive drinking, economic instability, and domestic violence. Like many other stories in Dubliners, Mrs. Mooney is paralyzed by this hopeless marriage, and trapped by the expectations of the society and the pressure of the Catholic Church. Unable to get a divorce from the "shabby stooped little drunkard" she calls husband, Mrs. Mooney could only settle for a separation sanctioned by the church. Being a very resourceful woman, Mrs. Mooney sold the butcher's shop and opens a boarding house, where she gives her daughter Polly "the run of the young men". Polly, Mrs. Mooney's nineteen years old daughter has "eyes which are grey with a shade of green through them". ...read more.

Mrs. Mooney's reflection enables her to assess her own character and her aim precisely: the picture is "decisive" and "satisfying." She has created a perfect opportunity for the expectations of the society to paralyze and trap Mr. Doran, leaving him no options but to compensate. Unlike other mothers, who "would be content to patch up such an affair for a sum of money... she would not do so. For her only one reparation could make up for the loss of her daughter's honor: marriage." The "reparation" Mrs. Mooney wants is not so much a simple mode of exchange but rather a long-term compensation--since after all what has been taken from Polly cannot in any sense be repaired or restored. It is as well a form of re-compensation for Mrs. Mooney's own disastrous marriage. Like previously mentioned, Mr. Doran is "a serious young man, not rakish or loud-voiced like the others" and he also has a constant source of income. How different from Mrs. Mooney's "shabby stooped little drunkard" of a husband who had ruined her previous "business." Like Mrs. Kearney in the story A Mother, Mrs. Mooney is desperately trying to fulfill her dream though her daughter, trying to make up for her hard life and disastrous marriage. ...read more.

Doran, presumably to hear his marriage proposal, she is not in the least bit surprised. Polly's eyes, her clear insight, and the last glimpse of her expose to us a woman every bit as sneaky as her mother. The final climactic choice is not really a choice at all; Joyce omits the crucial confrontation between Mr. Doran and Mrs. Mooney, because the determination of Mrs. Mooney and pressures of society are so strong, we know what Mr. Doran will choose. Like all human beings, all three of the main characters in The Boarding House are motivated by the instincts for survival. Mrs. Mooney needs to rent out rooms to traveling men in order to support her family, and she needs to find a husband to support Polly after she passes away. Polly needs to find a husband, both to take her place in the adult world and to get rid of the rumors. And once Mrs. Mooney confronts Mr. Doran, he has to marry Polly in order to preserve his own reputation and job. Even though this story ends with the prospect of marriage, it is not a happy solution, for all three characters are paralyzed by the expectations and trapped inside the narrow boxes of Dublin society. So are people really in control of anything, or are we just slaves to our surrounding? ...read more.