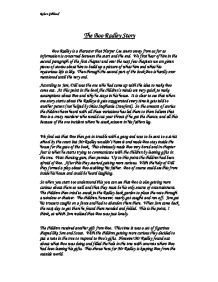 The Boo Radley Story Boo Radley is a character that Harper Lee steers away from as far as information is concerned between the start and the end. We first hear of him in the second paragraph of the first chapter and over the next few chapters we are given pieces of stories about him to build up a picture of what him and what his mysterious life is like. Then through the second part of the book Boo is hardly ever mentioned until the very end. According to Jem, Dill was the one who had came up with the idea to make Boo come out. At this point in the book the children's minds are very quick to make assumptions about Boo and why he stays in his house. ...read more.

First chewing gum, then pennies. Up to this point the children had been afraid of Boo. After this they started getting more curious. With the help of Dill they formed a play about Boo stabbing his father. Boo of course could see this from inside his house and could be heard laughing. So when you start too understand this you can see that Boo is also getting more curious about them as well and that they must be his only source of entertainment. The children then tried to sneak in the Radley back garden to place the note through a window or shutter. The children, however, nearly got caught and ran off. Jem got his trousers caught on a fence and had to abandon them there. ...read more.

At first Scout doesn't realise who the rescuer is. When she realises who it is she practically jumps with joy and we get his physical description for the first time. He is very plain skinned which proves the point that he had been trapped indoors all his life. Scouts reaction shows us that she has matured through the book, as her attitude is very different to the one she had at the start of the book. Boo's actions show us that from being locked inside all his life he has become very mentally "slow" and can barely talk and doesn't want to walk home by himself. Scout thinks to herself that Boo has been so kind to them over the years and they have given him nothing back but she realises that they have given him his only source of entertainment, as their street is the only area he can see from inside their house. Robert Gilliland ...read more.