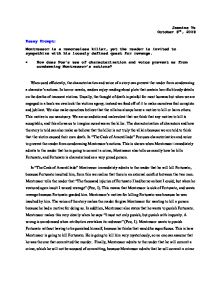 The Cask or Amontillado VS. The Black Cat

Jasmine Yu October 8th, 2008 Essay Prompt: Montressor is a remorseless killer, yet the reader is invited to sympathize with his loosely defined quest for revenge. * How does Poe's use of characterization and voice prevent us from condemning Montressor's actions? When used efficiently, the characterization and voice of a story can prevent the reader from condemning a character's actions. In horror novels, readers enjoy reading about plots that contain horrific b****y details on the deaths of innocent victims. Usually, the thought of death is painful for most humans but when we are engaged in a book we overlook the victims agony, instead we feed off of it to make ourselves feel complete and jubilant. We also make ourselves believe that the villains always have a motive to kill or harm others. This motive is our sanctuary. We are so s******c and malevolent that we think that any motive to kill is acceptable, and this allows us to imagine ourselves as the killer. The characterization of characters and how the story is told can also make us believe that the killer is not truly the villain because we are told to think that the victim caused their own death. In "The Cask of Amontillado" Poe uses characterization and voice to prevent the reader from condemning Montressor's actions. ...read more.

This makes us feel less sympathetic about Fortunato's death because we are seeing it though the eyes of the killer. This causes us to feel as though we are the ones killing Fortunato. In other words, since we are s******c creatures from birth, we over look the fact that we are witnessing a crime punishable by death, instead we are encouraging Montressor to continue his deed to see how Fortunato will die. Montressor begins his deed by luring Fortunato into a catacomb where he has asked Fortunato to test some amontillado. The two men continue until Fortunato coughs heavily. This causes Montressor to say "we will go back; your health is precious" (Poe, 2). Montressor tries to persuade Fortunato that he is sick and that he should return home, but Fortunato refuses to. This question is asked a number of times throughout "The Cask of Amontillado" and every time it is asked the s******c reader hopes that Fortunato will not turn back, so we can see how he dies. Montressor and Fortunato continue into the catacombs until they reach a niche where Fortunato is forced into while Montressor begins to "vigorously wall up the entrance of the niche" (Poe, 4). The stacking of the bricks to build a wall is seen though Montressor's eyes, so the reader feels as if they are Montressor and they are the ones building the wall. ...read more.

Fortunato is a gullible fool to think that Montressor is doing all of this just for some laughs and that he will actually let Fortunato test some Amontillado. When in reality Montressor is planning to kill him. Therefore, Fortunato's arrogance and foolishness cost him his life. In conclusion, Montressor is a remorseless killer, but the use of characterization and voice prevents the reader from thinking that Montressor is the villain. Poe begins "The Cask of Amontillado" by stating that Montressor will commit a crime due to a motive, this allows the reader to immediately want to forgive Montressor because he admits that he will do wrong. Poe also leads us into the malevolent mind of Montressor by telling the story in first person and shows us step by step how the death of Fortunato occurs through the eyes of Montressor. Poe characterizes the victim as an arrogant foolish drunkard, so the reader does not necessarily see him as innocent or feel bad about his death. Therefore, the use of characterization and voice can dramatically change a person's perspective on death and killing. I leave you with one question: Are we not as cruel and s******c as the texts we read? Poe, Edgar Allen. "The Cask of Amontillado." Elements of Literature, Third Course Enhanced. Ed. Kylene Bears and Lee Odell. Austin: Holt, Rinehart, and Winston, 2005. 173- 9. ?? ?? ?? ?? ...read more.