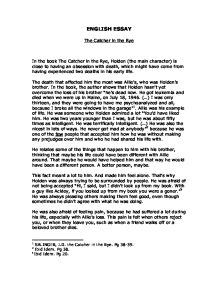 The Catcher in the Rye - Holden's obsession with death

ENGLISH ESSAY The Catcher in the Rye In the book The Catcher in the Rye, Holden (the main character) is close to having an obsession with death, which might have come from having experienced two deaths in his early life. The death that affected him the most was Allie's, who was Holden's brother. In the book, the author shows that Holden hasn't yet overcome the loss of his brother "he's dead now. He got leukemia and died when we were up in Maine, on July 18, 1946. (...) I was only thirteen, and they were going to have me psychoanalyzed and all, because I broke all the windows in the garage"1. ...read more.

A better person, maybe. This fact meant a lot to him. And made him feel alone. That's why Holden was always trying to be surrounded by people. He was afraid of not being accepted "Hi, I said, but I didn't look up from my book. With a guy like Ackley, if you looked up from my book you were a goner."3 He was always pleasing others making them feel good, even though sometimes he didn't agree with what he was doing. He was also afraid of feeling pain, because he had suffered a lot during his life, especially with Allie's loss. This pain is felt when others reject you, or when they leave you, such as when a friend walks off or a beloved brother dies. ...read more.

One of those "things" is his little sister Phoebe, who he loves very much and who - he feels - has to protect. The sad part about Holden's thoughts was the way his life was "another" thing, like if it was something normal not caring about himself. He didn't value his life haw he should. And didn't realize how important he was for others, like his sister. The feeling was also reflected in Holden's insecurity. He was an indecisive person. He was never sure about what he wanted and if his decision was the best one. That was why he was bad at making decisions. Holden was a very sensitive person even though that was the last thing he showed in the book, maybe he was afraid of feeling "phony". ...read more.