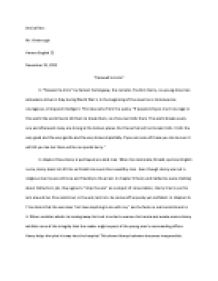 The Change in Frederick Henry in &quot;A Farewell to Arms&quot;

﻿Jessica Ross Mr. Kimbrough Honors English 12 November 25, 2012 ?Farewell to Arms? In ?Farewell to Arms? by Earnest Hemingway, the narrator, Fredrick Henry, is a young American ambulance driver in Italy during World War 1. In the beginning of the novel he is introduced as courageous, strong and intelligent. This idea came from the quote; ?If people bring so much courage to this world the world has to kill them to break them, so of course it kills them. The world breaks every one and afterward many are strong at the broken places. But those that will not break it kills. It kills the very good and the very gentle and the very brave impartially. ...read more.

When a soldier admits to tossing away his trust in order to worsen his hernia and evade service Henry exhibits none of the integrity that the reader might expect of the young man?s commanding officer. Henry helps him plot his way into the hospital. This shows Henrys behavior becomes irresponsible. Henry, in chapter 8, explains how the other officers are disrespectful to Italy because they think Italy should withdraw from the war. Although Henry agrees he is disappointed in the men for talking about it. Henry comes off as rather stoic. While Henry listen to the men discuss victory and defeat seems ignorant rather than passionate. Henry appears to disagree. It was the sense of loss, fear, and anger that fuels the Italians? arguments, despite whether he lives or dies. ...read more.

As the story comes to an end Lieutenant Frederic Henry is a different man than he was at the opening of A Farewell to Arms. Henry finally rest from trying to catch up to the same maturity level as Catherine, his poor wife, whom dies shortly after labor along with stillborn baby. Although he struggled he did end up being as wise and mature as Catherine. When Henrys character is first introduced he?s involved with alcohol and carless activities he changes dramatically throughout the story. His entire life he was getting stronger every day and he was learning from his mistakes and others mistakes to become the wise man he ended up to be. He now understands the world and his place in it, as he walks into the rain lonely and heartbroken. ...read more.