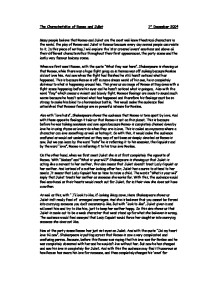 The Characteristics of Romeo and Juliet

The Characteristics of Romeo and Juliet 1st December 2004 Many people believe that Romeo and Juliet are the most well know theatrical characters in the world; the play of Romeo and Juliet is famous because every day normal people can relate to it. In this piece of writing I will explore the 'star crossed lovers' emotions and above all their different characteristics throughout their first appearances, the party scene and the lastly very famous balcony scene. When we first meet Romeo, with the quote "What fray was here". Shakespeare is showing us that Romeo, while there was a huge fight going on in Verona was off sulking because Rosline did not love him. And now when the fight had finished he still hasn't noticed what has happened. This is because Romeo is off in some dream world of his own, he is completely oblivious to what is happening around him. This gives us an image of Romeo sitting down with a fight scene happening before his eyes and he hasn't noticed what is going on. Also with the word "fray" which means a violent and bloody fight. Romeos feelings are made to sound much worse because he hasn't noticed what has happened and therefore his feelings must be so strong to make him blind to a horrendous battle. ...read more.

But with "look to like". Juliet gives in and will meet him and try to like him, just to keep her mother happy. So this also shows us that Juliet is made out to be a weak character that wont stand up for what she believes is wrong. The audience would feel annoyed that Lady Capulet would force her daughter into marrying someone she does not like. Now at the party scene Romeo has just set eyes on Juliet. And with the quote "Did my heart love till now". Shakespeare is putting across that Romeo is now a very complicated and confusing person. Because, before this Romeo was saying that his love was for Rosline and he was completely obsessed with her and he wouldn't live without her. But now he has changed and now his love is completely for Juliet. And with this the audience may find it humorous as how Romeo has sworn his love for someone, and then completely changes his 'vows' for another person. But also the audience might find it dangerous that if Romeo keeps changing his love for different people, it might end up in tears. Or worse, death. Following on and at the end of the party Shakespeare shows us that with "My grave will be my wedding bed". ...read more.

This term is called dramatic irony, because the audience knows that Romeo is listening, but they also know what Juliet doesn't know. This, for the audience would create a tense atmosphere for they do not know whether Romeo will speak out to Juliet, this would also create suspense between the characters and the audience. As well as this when Romeo hears Juliet speak, he then replies by "Oh speak again bright angel". So here Shakespeare shows us that again Romeo is in a world of his own. And with the word "angel", it adds imagery of Juliet who is angel of outstand natural elegance and beauty. And also by the word "angel", it implies that Juliet is therefore closer to heaven. The audience in this case would think that Romeo is completely obsessed with Juliet and would feel surprised that Romeo is relating Juliet to such a Godley creature. So I have now shown you the many different emotions that the passionate characters of Romeo and Juliet go through in the first two scenes in the play. But sadly because of their parent's rage and hatred with the other family, they mistakably force Romeo and Juliet down "the fearful passage of their death-marked love" and because of their parents selfishness our "star-crossed lovers come to a tragic and blood spilt end. By James O'Mara-Copeman 10CMC Total amount of words - 1,253 ...read more.