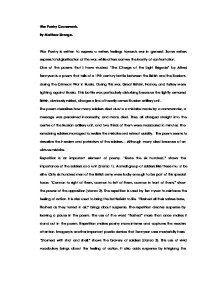 War Poetry Coursework, By Matthew Stronge. War Poetry is written to express a writers feelings towards war in general. Some writers express total glorification of the war, while others convey the inanity of confrontation. One of the poems that I have studied "The Charge of the Light Brigade" by Alfred Tennyson is a poem that tells of a 19th century battle between the British and the Russians during the Crimean War in Russia. During this war, Great Britain, France, and Turkey were fighting against Russia. This battle was particularly disturbing because the lightly armored British, obviously misled, charges a line of heavily armed Russian artillery unit. The poem describes how many soldiers died due to a mistake made by a commander, a message was perceived incorrectly, and many died. They all charged straight into the centre of the Russian artillery unit, and two thirds of them were massacred in minutes. The remaining soldiers managed to realize the mistake and retreat quickly. The poem seems to describe the heroism and patriotism of the soldiers... Although many died because of an obtuse mistake. ...read more.

The line continues to say that the man turned their heads on the haunting flares, maybe in a half-hearted effort to shut them out of their minds. Line four is even less enthusiastic - it describes the men as 'trudging to their distant rest'. Maybe the sentence has a double meaning, maybe 'distant rest' is meant to be read further into and is a different meaning of the deaths that eventually the men will encounter. If this is the case then the line is quite dark, but if the line is taken as it is written then there is a little more optimism being displayed. Lines five to eight maintain with the tired, droning tone of those prior to them; they describe how the men were marching almost subconsciously. The word is then repeated, this time in capitals. I think this usage of words creates an effect of a double take. The rest of this line and the line preceeding it outline the men's rush to put on the masks, and their clumsiness in their haste. The third line of this stanza, line eleven in the poem as a whole, begins to tell of how one soldier did not manage the operation quickly enough and was yelling for attention. ...read more.

He presents the horror of senseless death in the trenches and shows us how the famous line from the Roman poet Horace, 'it is sweet and becoming to die for your country�, is a lie. We are told that Tennyson wrote 'Light Brigade� in a few minutes after reading the description in The Times of the Battle of Balaclava in 1854. He was a civilian poet, as opposed to a soldier poet like Owen. His poem 'Light Brigade� increased the morale of the British soldiers fighting in the Crimean War and of the people at home, but Tennyson had not been an eyewitness to the battle he describes. Wilfred Owen wrote 'Dulce� towards the end of the First World War. He was killed in action a week before the war ended in 1918. He wanted to end the glorification of war. Owen was against the propaganda and lies that were being told at the time. He had first-hand experience of war and wanted to tell people back at home the truth. Owen was an officer and often had to send men to their deaths and 'Dulce� gives a personal account of what the war was like. Many patriotic poems had been written at the time. Owen knew that they lied. Bottom of Form ...read more.