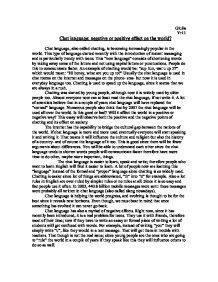 The chat language, also called chatting, is becoming increasingly popular in the world

Giulia Yr11 Chat language: negative or positive effect on the world? Chat language, also called chatting, is becoming increasingly popular in the world. This type of language started recently with the introduction of instant messaging and is particularly trendy with teens. This "new language" consists of shortening words by taking away some of the letters and not using capital letters or punctuations. People do this to communicate faster. An example of chatting would be: "sup hun, wat u up 2?" which would mean: "Hi honey, what are you up to?" Usually the chat language is used in chat rooms on the internet and messages on the phone- sms- but now it is used in everyday language too. Chatting is used to speed up the language, since it seems that we are always in a rush. Chatting was started by young people, although now it is widely used by older people too. ...read more.

The chat language is easier to learn, speak and write; therefore people who want to learn English will find it easier to learn. A lot of people now are learning this "language" instead of the formal and "proper" language since chatting is so widely used. Chatting is easier since lot of things are abbreviated, "th" into "d" for example. Also a lot rules in English are over-ruled by simpler rules or no rules at all. Since it is so easy and fast people use it often. In 2003, 440.8 billion mobile messages were sent: these messages were probably all written in chat language (also called slang nowadays). Chat language is helping the world progress, and evolving is thought to be for the best since it reveals new horizons. Even though, we must bear in mind that once something has evolved it can never go back. ...read more.

These new students will have difficulty in class when asked to say or write something by their teachers. Although these students will have problems in school, they are also learning about a new culture. A more serious problem that the chat language is causing is that it is disintegrating the culture of countries; since a very important part, if not the main, of the culture of a country is the language. By using text language we are erasing the history of a country, because the language will tell a lot about it. For example which language has influenced the country: Greek, Latin etc. Also, if everyone starts speaking the same language with no real rules life will become monotonous and very boring. In conclusion I think the chat language is affecting the world negatively. It is erasing important parts of our history, since the world is becoming so fast it is not very nice to make it even faster. ...read more.