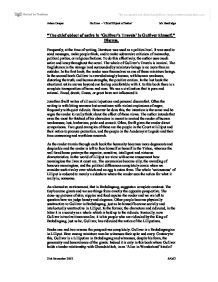 "The chief object of satire in 'Gulliver's Travels' is Gulliver himself." Discuss. Frequently, at the time of writing, literature was used as a political tool. It was used to send messages, make people think, and to make subversive criticism of monarchy, political parties, or religious factions. To do this effectively, the author uses much satire and irony throughout the novel. The whole of Gulliver's Travels is ironical. The Englishman in the strange land surrounded by miniature beings is no more than an outsider. In the first book, the reader sees themselves as one of these miniature beings. In the second book Gulliver is overwhelmingly human, with human weakness, distorting the truth, and human strengths, the positive oration. In the last book the situational satire moves beyond our feeling comfortable with it. In this book there is a complete transposition of horse and man. We see a civilisation that is pure and rational. Fraud, deceit, illness, or greet have not influenced it. Jonathan Swift writes of all social injustices and personal discomfort. Often the writing is with biting sarcasm but sometimes with violent explosions of anger, frequently with quiet ridicule. However he does this, the intention is the same and he urges the reader to really think about the effect of these views. The author intends that even the most far-fetched of his characters is meant to remind the reader of human weaknesses; l**t, barbarism, pride and conceit. ...read more.

Gulliver himself plays a more prominent part in Books one and two. He is treated ceremoniously and with high regard by the Lilliputians, and with affection by the Brobdingnagians who regard him almost as an interesting pet. The high regard held by the Lilliputians is not seen in book three where the Laputans quite simply ignore him. The only interaction he has in book three is with the academics of Lagardo, and then only to demonstrate the magical understanding these people seem to have of life and logic. By book four, Gulliver is looked upon suspiciously, almost with disgust as he is regarded as a kind of Yahoo. Gulliver is portrayed as an honest, educated man determined to earn a living as a ship's surgeon at sea. He is philosophical about the adventures and mishaps he encounters. He faces the new and wonderful people with genuine interest and relays details refreshingly and without malice. It is Gulliver's attention to detail with gives the reader an insight into the wonderful worlds that Gulliver visits. We see, hear and experience through Gulliver's senses. It is this which helps us to decide very effectively about Gulliver's personality, his likes and dislikes, his joys and fears, his morality and political preferences. Gulliver has a sense of honour; he has left his family in order to provide for them. He is reminded of his oath to the Emperor and feels embarrassed when he is publicly displayed. ...read more.

Gulliver is used to deliver a technique or verbal irony. In Book one, we are told of the Emperor's qualities, all of which are the opposite of George's characteristics. In Book two Gulliver's praise of his country is overexaggerated, and therefore lacks credibility. Very often one seemingly credible paragraph is followed by another, which makes us reconsider what we have already read. This is a particular device in Book four which engages the reader to reflect upon what they have read. An example of this is when Gulliver explains what horses are used for in England, and in doing so, shocks the Houyhnhnms. Gulliver is also used to shock and embarrass the reader. Gulliver urinates and moves his bowels all in graphic detail. He describes his being stripped naked and riding upon one of the n*****s of a Maid of Honour. He describes the texture of skin and obscene eating habits in magnified detail and culminates in a graphic portrayal of the yahoos. Swift makes us stop to reflect upon the unspoken natural moments of our lives which link us to animals more than we care to admit. Indeed most readers identify, as Gulliver did, with the Houyhnhnms. This must be the absolute irony, as irony is impossible in the Houyhnhnms' society because 'the thing which is not' is not meant as a deception. In book four the satirical ingredient is sarcasm and the grey 'master' frequently uses this. He describes the Yahoo as 'a sort of animal'. Adam Draper Gulliver - 'Chief Object of Satire' Mr Hanbidge 21st November 2002 6AM2 ...read more.