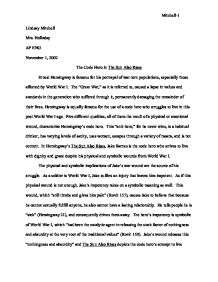 The Code Hero in The Sun Also Rises

Lindsay Mitchell Mrs. Holladay AP ENG November 1, 2002 The Code Hero in The Sun Also Rises Ernest Hemingway is famous for his portrayal of war-torn populations, especially those affected by World War I. The "Great War," as it is referred to, caused a lapse in values and standards in the generation who suffered through it, permanently damaging the remainder of their lives. Hemingway is equally famous for the use of a code hero who struggles to live in this post World War I age. Five different qualities, all of them the result of a physical or emotional wound, characterize Hemingway's code hero. This "anti-hero," for he never wins, is a habitual drinker, has varying levels of sanity, uses women, escapes through a variety of means, and is not content. In Hemingway's The Sun Also Rises, Jake Barnes is the code hero who strives to live with dignity and grace despite his physical and symbolic wounds from World War I. The physical and symbolic implications of Jake's war wound are the source of his struggle. As a soldier is World War I, Jake suffers an injury that leaves him impotent. As if this physical wound is not enough, Jake's impotency takes on a symbolic meaning as well. This wound, which "still throbs and gives him pain" (Rovit 157), causes Jake to believe that because he cannot s******y fulfill anyone, he also cannot have a lasting relationship. He tells people he is "sick" (Hemingway 21), and consequently drives them away. The hero's impotency is symbolic of World War I, which "had been the catalytic agent in releasing the stark factor of nothingness and absurdity at the very root of the traditional values" (Rovit 159). ...read more.

Because Jake's wound prevents him from s****l gratification, he cannot s******y use women. He instead demonstrates this code hero characteristic in a more symbolic way in that "...however kindly Jake treats Georgette, his actions still reflect the rigid gender rules of the twentieth century" (O'Sullivan 66). Even though Jake does not use Georgette for what she is, he still pays for her company at the end of the night. "I took a fifty franc note, put it in the envelope, sealed it, and handed it to the patronne [to give to Georgette]" (Hemingway 28). Jake proves that even impotency cannot prevent him from assuming the male role in certain aspects of life. However, in contrast with the standard code hero, women also use Jake. According to critic Sibbie O'Sullivan, "Jake cannot be the traditional man because he is impotent" (70). Therefore, Brett has control of their relationship. This is made evident when Jake asks Brett if they could live together. She replies, "I don't think so. I'd just tromper you with everybody. You couldn't stand it" (Hemingway 57). Although both Brett and Jake realize they "could never have had an idyllic relationship even if [Jake] had not been wounded" (Hays 97), Brett still maintains control over their relationship. Furthermore, Brett uses Jake by calling for him every time she gets herself into an undesirable situation. This emphasizes the idea that a Hemingway code hero not only uses women as a way to ease the pain of reality, but that women remind him of this reality by using him. Jake physically escapes from the problems his struggle presents through travel. ...read more.