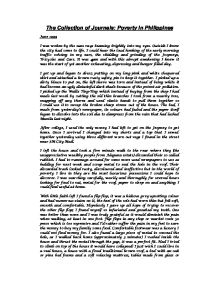 The Collection of Journals: Poverty in Philippines

The Collection of Journals: Poverty in Philippines June 1999 I was woken by the suns rays beaming brightly into my eyes. Outside I knew the city had come to life. I could hear the loud honking of the early morning traffic echoing in my ears, the skidding and grinding of the Jeepneys, Tricycles and Cars. It was 4am and with this abrupt awakening I knew it was the start of yet another exhausting, depressing and hunger filled day. I got up and began to dress; putting on my long pink and white chequered skirt and attached a brown rusty safety pin to keep it together. I picked up a dirty blouse to put on, the left sleeve was torn and instead of being white it had become an ugly distasteful dark shade because of the potent air pollution. I picked up the Wallis Ting-Ting which instead of buying from the shop I had made last week by cutting the old thin branches I took from a nearby tree, snapping off any thorns and used elastic bands to pull them together so I could use it to sweep the broken sharp stones out of the house. The bed, I made from yesterday's newspaper, its colours had faded and the paper itself began to dissolve into the soil due to dampness from the rain that had lashed Manila last night. ...read more.

I rushed inside the house and thrust the metal through the gap, it was a perfect fit. Had I tried to climb on top of the house it would have collapsed! I just wish I could live in a real house, a house with a fixed traditional brown roof, a bed with an oak or pine bed frame and a soft relaxing mattress, tables made from glass or even marble instead of using the dirty soil on the ground and a marble sink with sterling silver taps. A clean, hygienic and fixed floors and a constant water supply not this shanty house made out of scrap metal, it is not even fit for a dog. I touched the walls and I could still feel the intense heat from the relentless sun. I burnt my hand after struggling to fix the roof; I picked up the Sampaguita flower garlands I had spent five hours last night putting together so I could sell them to people going into the church for mass or prayer. These would be offered as gifts as they prayed and placed on the statues of saints, as a sign of sacrifice for their prayers to be answered or to be blessed. ...read more.

I think it was 2:00 in the morning when I walked up the hill to Almanza estate with two old grimy plastic buckets to fill with water, I waited for at least thirty minutes until it was my turn, I went up to the brown rusty pump and began the arduous task of pumping water. The screeching of the metal burst my ears and after an exhausting ten minutes I filled my buckets. I took deep breaths till I reached home, trying not to spill a single drop of water. Each step became harder and it felt as if each bucket was getting heavier whiles I was getting weaker with every step. I took the buckets inside the house so no one would try and steal the water. I lie down and close my eyes, next morning I was woken by the suns rays beaming brightly into my eyes just like yesterday; I went through the same routine and got to college. Now I'm here sitting in the intimidating dark classroom, in a creaky and very uncomfortable chair. I'm meant to be writing an essay on the history of our hero Jose Rizal but I wanted to add another entry to my journal because the college supplies pencils however, we are not able to take them home. I know that one day there will be a change but only the lord can answer my prayers and bless me. ...read more.