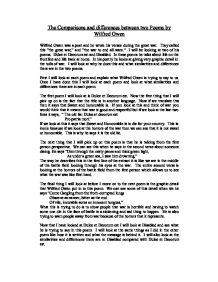 The comparisons and differences between two poems by Wilfred Owen.

The Comparisons and differences between two Poems by Wilfred Owen Wilfred Owen was a poet and he wrote his verses during the great war. They called this "the great war," and "the war to end all wars." I will be looking at two of his poems. Dulce et Decorum est and Disabled. In these poems he talks about life on the frontline and life back at home. In his poetry he looks at giving very graphic detail in the toils of war. I will look at why he does this and what similarities and differences there are in the two poems. First I will look at each poem and explain what Wilfred Owen is trying to say to us. Once I have done this I will look at each poem and look at what similarities and differences there are in each poem. The first poem I will look at is Dulce et Decorum est. Now the first thing that I will pick up on is the fact that the title is in another language. ...read more.

We can see some of this detail when we he says "Come Gargling from the froth-corrupted lungs Obscene as cancer, bitter as the cud Of vile, incurable sores on innocent tongues," What this is trying to do is to show people that war is horrible and having to watch some one die in the face of battle is a sickening and sad thing to happen. He is also trying to warn people away from war because of the horrors that it represents. Now that I have looked at Dulce et Decorum est I will look at Disabled and see what he is trying to say in this poem. I will look at the same things as I did in the other poem like how it is written and what the message is behind it. I will also look at the similarities and differences there are in Disabled compared with Dulce et Decorum est. The first thing that I can see and is a very noticeable difference between the two poems is how they are written where as Dulce et Decorum est was written in the first person this one is written in the third person. ...read more.

Only a solemn man who brought him fruits Thanked him; and then inquired about his soul." As I said this is showing that war does not make you a hero because all the people will be looking at the tragedies not the fact that someone made it home alive. In conclusion I can say that both of the poems are very pessimistic and show all the bad points of the war. This is good because it will warn people away from war. Unfortunately this does not work given the current state of affairs. I think that if Mr Blair and Mr Bush had read these poems then maybe they would have stayed away from the war. I also think that linked to that the poems serve as a warning of what could happen. I think that the poems achieve there goal and this is good. I think that Wilfred Owen is a good but controversial writer and has shown that war is not all it is cracked up to be and is not as easy as the propaganda makes out. ...read more.