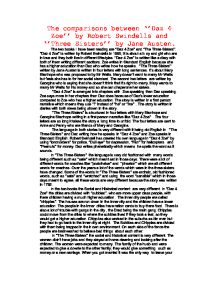 The comparisons between ''Daz 4 Zoe'' by Robert Swindells and ''Three Sisters'' by Jane Austen.

The comparisons between ''Daz 4 Zoe'' by Robert Swindells and ''Three Sisters'' by Jane Austen. The two books I have been reading are ''Daz 4 Zoe'' and ''The Three Sisters''. ''Daz 4 Zoe'' is written by Robert Swindells in 1990, it is about a boy and girl who are in love and they both live in different lifestyles. ''Daz 4 Zoe'' is written like a diary with both of them writing different sections. Zoe writes in Standard English because she has a higher education than Daz who writes how he speaks. ''The Three Sisters'' written by Jane Austen is written in four letters with long sentences. It's about Mary Stanhope who was proposed to by Mr Watts. Mary doesn't want to marry Mr Watts but feels she has to for her social standard. ...read more.

The four letters are sent to Anne and Fanny who are friends of Mary and Georgina. The language in both stories is very different with it being old English in ''The Three Sisters'' and Daz writing how he speaks in ''Daz 4 Zoe'' and Zoe speaks in Standard English. Robert Swindell has created his own language in ''Daz 4 Zoe'' by using ''loronorders'' for police, ''Dull eye'' for depression, ''Fan'' for helicopters and ''Peanuts'' for money. Daz writes phenetically which means he spells the word as it sounds. In ''The Three Sisters'' the language is very old fashioned with many words being different such as ''sate'' which meant sat in those days. There were a lot of different words for coaches like ''postchaise'' and ''phaeton'' which are all different words for coaches. ...read more.

Chippies could move from the cities to where the subbies lived if they took a test, so they would get a higher education. Chippies also worked in the suburbs as bin men but they had to go back to the inner city at night. The Subbies and Chippies are divided with them being trapped in their own environment. On each side of the fence the people are brainwashed to believe bad things about each other. In ''The Three Sisters'' the social and historical content is very different. The women didn't have jobs and they stayed at home cleaning and looking after the children. The women were expected to marry. The family of the husband were expected to give a dowrie to the other family; they would give something such as money or a new carriage. When you got married it was the only way to leave your parents and home. Once the women were married they were allowed to chaperone their younger sisters. ...read more.