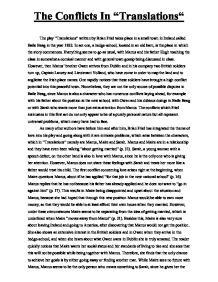 The Conflicts In "Translations" The play "Translations" written by Brian Friel takes place in a small town in Ireland called Baile Beag in the year 1833. In act one, a hedge-school, located in an old barn, is the place in which the story commences. Everything seems to go as usual, with Manus and his father Hugh teaching the class in somewhat a comical manner and with general town gossip being discussed in class. However, then Manus' brother Owen arrives from Dublin and in his company two British soldiers turn up, Captain Lancey and Lieutenant Yolland, who have come in order to map the land and to anglicize the Irish place names. One rapidly notices that these soldiers have brought a high conflict potential into this peaceful town. Nonetheless, they are not the only source of possible disputes in Baile Beag, since Manus is also a character who has numerous conflicts laying ahead, for example with his father about the position at the new school, with Owen and his dubious doings in Baile Beag or with Sarah who wants more than just extra attention from Manus. The conflicts which Friel insinuates in this first act do not only appear to be of a purely personal nature but all represent universal problems, which many have had to face. As many other authors have before him and after him, Brian Friel has integrated the theme of love into his play and going along with it are intricate problems, which arise between the characters, which in "Translations" namely are Manus, Maire and Sarah. ...read more.

The conflict between Maire and Manus is universal because many have to decide between being together with the one they love or with the one that can guarantee them social acceptance and a financially safe situation. As is this conflict, unrequited love, like Sarah's, is also a problem in all countries on the globe. There will always be people who do not get the love returned to them that they give to others and requited love will just remain a dream for these people. Especially those like Sarah will often not get the love they desire and so only a bit of attention can easily be misinterpreted by them. The second set of problems that arise in this play are the conflicts within Manus' family, namely that Hugh does not see Manus as an equal and admires Owen to a larger extent and the problematic relationship between the brothers Owen and Manus is also an issue, which ,like the first conflict, is also a representation of real world conflicts. Hugh is the head teacher in the hedge-school and Manus is somewhat of an assistant for him. Even though, Manus seems to be doing the most work in this school, Hugh does not respect him. For Hugh, Manus is just good enough to hang away his coat and hat, as if Manus is "a footman". ...read more.

However, for others it is a curse because it forces them to give up their traditional religions, languages, cultures etc. in order for them to be integrated into the global society. This is exactly what is represented in Friel's play, since the British believe that it is good to have all the people in the empire speaking the same language, but they are just not imagining what has to be sacrificed for this change. This is how modern politicians and diplomats still act today, because they usually only see the positive aspects of globalization and often ignore the cultural goods that are being lost. Friel has integrated intricate conflicts into his play which reflect problems with which people in the real world have to deal with all the time. All the problems that are touched on in the first act are problems that many people have to face and problems that occur in nearly everybody's lifetime. Many have experienced unrequited love like Sarah's, relationships that have been very upsetting and disappointing like Maire's. Besides this many have seen or experience conflict with in the family like those Manus has had to face and large groups of people especially in underdeveloped countries have been confronted with a situations in which they and their cultures were integrated in such a way so that they would fit into the global society. Therefore, one can say that Friel's book is not only a great reflection of conflicts in the 19th Century, but that it is still able to represent conflicts occurring today. ...read more.