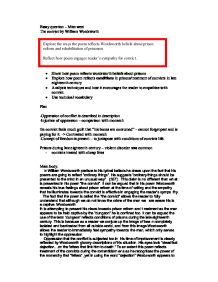 Essay question - Miss west The convict by William Wordsworth * Show how poem reflects wordsworth beliefs about prisons * Explore how poem reflects conditions in prisons/treatment of convicts in late eighteenth century * Analysis techniques and how it encourages the reader to empathise with convict. * Use technical vocabulary Plan -Oppression of conflict is described in description -Injustice of oppression - comparison with monarch the convict feels much guilt that "his bones are consumed" - cannot forget past and is paying for it. -> Contrasted with monarch -Concept of freedom is present - to juxtapose with conditions of convicts life. Prisons during late eighteenth century - violent disorder was common - convicts treated with cheap lives Main body. In William Wordsworth preface to his lyrical ballads he draws upon the fact that his poems are going to reflect "ordinary things". He suggests "ordinary things should be presented to the mind in an unusual way" (357). This claim is no different than what is presented in his poem "the convict". It can be argued that in his poem Wordsworth reveals his true feelings about prison reform at the time of writing and the empathy that he illuminates towards the convict is effective in engaging the reader's sympathy. ...read more.

By using the term "dried" it can be argued he is attacking prison offices and guards who no longer take notice in what the prisoners have to say, and leave them there to rot in their own guilt. This is further evident when the man "wishes the past undo". It appears the man cannot get rid of the guilt he feels for the on his view." The use of the word "blackened" emphasizes the life of the prisoners during this time, and such darkening language, particularly the use of "blood" and "dried" encourages the reader to feel sympathy for prisoners who appear to have lost all chance in life. It can be argued that Wordsworth clearly reflects his views on prison reform and the treatment of convicts in the late eighteenth century when he contrasts the prisoners situation with that of the monarch. The guilt the convict feels is contrasted with the monarch who "from dark synod or blood reeking field. To his chamber is led". The image of a "dark synod" and "blood reeking field" bring much negative connotations to the crime of the monarch, it can be said they suggest a sinister, b****y crime and surely this may be no different from that of the convict. ...read more.

This is apparent from the opening of the play in which he describes the convict as an "outcast of pity" this engages the reader as it highlights that not only has the convict become an outcast with society, and lost his freedom he is also now an outcast of pity. This quote it can be argued engages the reader and allows the reader to feel much sorrow, as the man does not even have pity as a feeling. The situation of the common criminal is repeatedly addressed throughout the poem also; I think Wordsworth does this as an attack on the political system and treatment of the oppressed during this time. In revealing the criminals harsh prison life, Wordsworth it can be said is revealing important truths of lives of the criminals. He appears to take this situation that many men were troubled with and point out that freedom is so important to men and also empathy as a passion. The narrator who at the end explains "my care, if the arm of the mighty were mine, would plant thee where thou'st might blossom again" further emphasizes this. This reflects the sorrow the narrator feels over the loss of freedom for the convict, Wordsworth is communicating to the audience how his chance for freedom is lost now he is in prison, and this serves as an attack against the rehabilitation of convicts. ...read more.