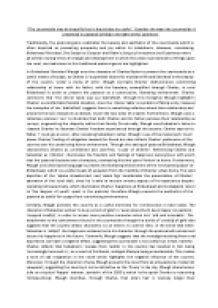 &quot;The countryside may be beautiful but it should also be useful&quot;. Discuss in relation to She Stoops to Conquer, Brideshead Revisited and Blake's Songs.

﻿?The countryside may be beautiful but it should also be useful.? Consider the ways the countryside is presented in pastoral writing in the light of this comment. Traditionally, the pastoral genre celebrates the beauty and aesthetics of the countryside which is often depicted as promoting prosperity and joy within its inhabitants. However, considering Brideshead Revisited, She Stoops to Conquer and Blake?s Songs of Innocence and Experience were all written during times of change and development in which the urban is presented to infringe upon the rural, contradictions to this traditional pastoral genre are highlighted. In Brideshead Revisited Waugh uses the character of Charles Ryder to present the countryside as a useful means of escape, as Charles is ?suspended? above his mundane life and liberated in the beauty of the country ?under a clump of elms?. Waugh contrasts Charles? dysfunctional, constricting relationship at home with his father, with the freedom; exemplified through Charles, in rural Brideshead in order to present the pastoral as a constructive, liberating environment. Charles comments that ?the dinner table was our battlefield?, through this metaphor Waugh highlight?s Charles? uncomfortable familial situation, since the ?dinner table? is symbolic of family unity, however the metaphor of the ?battlefield? suggests there is something nefarious about their relationship and presents the two characters as distant, much like two sides of a battle. ...read more.

This positive depiction of Julia suggests that the city and its inhabitants are more beautiful and ‘especially female’ than the rural countryside. Moreover, Charles ‘caught a thin bat’s squeak of sexuality’ from Julia, the adjective ‘thin’ and the profound description of Julia’s character exemplifies the close attention Charles was paying Julia, suggesting that Charles is able to enjoy the city and its fopperies as much as the beauty of the countryside. Similarly, in She Stoops to Conquer Goldsmith reflects the desirability of the town and subsequently the lack of excitement and beauty found in the country. Through the character of Mrs Hardcastle, Goldsmith presents the anti-pastoral view that it is the city which is useful, to ‘rub off the rust’, which is accumulated with time spent in the country. ‘Rust’ suggests that country life is constricting and harmful rather than fruitful, contrasting excitement of prosperous ‘London’ and the ‘fashions’, of which Mrs Hardcastle ‘love(s) to talk’. Moreover, Goldsmith reveals that Mrs Hardcastle reads the ‘Scandalous Magazine’ in a vain attempt to vicariously enjoy London and keep abreast of ‘every tête-a-tête’ in the town, which suggests that Mrs Hardcastle wishes to escape the useless ‘trumpery’ in the country in order to pursue a more adventurous town existence portrayed in the ‘Scandalous Magazine’. However, Goldsmith uses misinformed references in Mrs Hardcastle’s speech to show her limited, ‘second-hand’ understanding of the town, which presents her character as vacuous and ...read more.

Blake presents nature as a domineering force which guides humanity into maturity through the use of the imperative. Blake shows the ?sun? ?make happy the skies?, showing the control which nature and the country has over our lives. Furthermore, Blake juxtaposes the ?girls and boys? with the ?old folk? in this poem to show how the country and the ?echoing green? has resulted in the maturation of ?Old John? and the other ?old folk?. The use of positive language reflects how nature has positively influenced the lives of those on ?the echoing green?. Blake highlights that John ?does laugh away with care?, by using ?care? at the end of the line Blake emphasises the love and kindness of John which has been nurtured by his ?youth time? on ?the echoing green?, suggesting that nature has been a useful moral guide and resulted in an empathetic ?car(ing)? generation. In conclusion, it is clear all texts present the countryside as beautiful and uncorrupted, with varying degrees of profundity. However, between texts the utility of the country is debatable, while Brideshead Revisited and Blake?s Songs of Innocence and Experience form the prominence and importance of the country as a major theme, She Stoops to Conquer debates the influence of the country on the lives of its inhabitants and challenges the stereotypes of the country as being adorned by all. Overall, highlighting the country as important with perhaps certain characteristics which undermine its utility. ...read more.