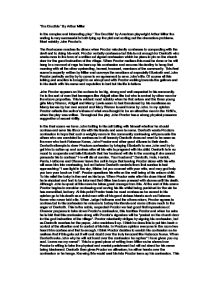 'The Crucible ' By Arthur Miller In the complex and interesting play ' The Crucible' by American playwright Arthur Miller the ending is very successful in both tying up the plot and sorting out the characters problems. Most notably John Proctor's. The final scene reaches its climax when Proctor reluctantly confesses to compacting with the devil and to doing his work. Proctor verbally confesses but this is not enough for Danforth who wants more in the form of a written ad signed confession which he plans to pin on the church door for the good instruction of the village. When Proctor realises this must be done or he will hang in a moment of rage he tears up his confession and secures his destiny to hang that morning with all the other upstanding, honest, innocent, members of the community. This final scene is expertly written by Miller and conveys the emotions of especially Elizabeth and John Proctor perfectly as thy try to come to an agreement to save John's life. Of course all this talking and emotion is brought to an abrupt end with Proctor walking towards the gallows and to his death with his name and reputation in tact but his life in tatters. John Proctor appears on the surface to be big, strong and well respected in his community. ...read more.

When Proctor asks after his close friend Giles he is shocked and hurt to be informed that Giles has been pressed with stones until his death. Although John is upset at this news he takes great courage from this. At the end of this scene Proctor begins to consider confessing and saving his life whilst being punished for the sin he has committed, lechery. At this point Proctor feels he must confess as he cannot in his opinion go to his death as a sinful man with all his good sinless friends such as Rebecca Nurse who never told a lie. When Judge Hathorne and the others return, Proctor agrees to confess but in his confession he refuses to betray his friends and name others much to the anger of Danforth. This is the noble, respected Proctor we had good first impressions of. Cheever prepares to take down Proctor's confession, this horrifies Proctor and when he asks he is told that this confession along with Proctor's signature will be "posted on the church door for the god instruction of the village". Proctor reluctantly obliges by signing his confession, but as Danforth reaches for the paper, John snatches it up. I think he does this to put him back n control of the situation and in control of his fate. ...read more.

I assume that this is so she can take Elizabeth's place as John's wife. When John Proctor enters, Abigail expects that the Proctor has come to see her when in fact John has come to see what all the talk of witchcraft is about. When eventually the two are left alone Abby professes to love John and she believes he feels the same way. Proctor rejects her advances and denies there is anything between them: "No, No Abby that's done with". The way Arthur writes this suggests that there has been something between the two in the past. The language used by Miler shows the contrast between feelings of Proctor towards Abigail and of Abigail towards Proctor. Abby feels that she and John can still be together. She reminds John of the night they spent together: " I know how you clutched my back behind your house and sweated like a stallion whenever I came near! Or did I dream that". Proctor quickly hits back firmly referring to Abigail as " Child-" This sends Abby off the rails and she begins to slate Elizabeth " Oh I marvel how such a strong man may let such a sickly wife be". Act 2 is set in the common room of the Proctor's house. In this Act we learn more about the character of John Proctor. This act begins with John returning for a hard days labouring in the his field. ...read more.