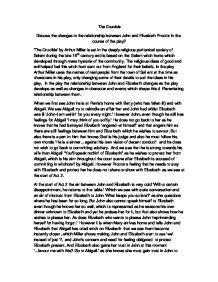 The Crucible: Discuss the changes in the relationship between John and Elizabeth Proctor in the course of the play?

The Crucible Discuss the changes in the relationship between John and Elizabeth Proctor in the course of the play? 'The Crucible' by Arthur Miller is set in the deeply religious puritanical society of Salem during the late 18th century and is based on the Salem witch hunts which developed through mass hysteria of the community. The religious ideas of good and evil helped fuel this witch hunt sent out from England for their beliefs. In the play Arthur Miller uses the names of real people from the town of Salem at the time as characters in his play, only changing some of their details to suit the ideas in his play. In the play the relationship between John and Elizabeth changes as the play develops as well as changes in character and events which shape this differentiating relationship between them. When we first see John he is at Parris's home with Betty (who has fallen ill) and with Abigail. We see Abigail try to rekindle an affair her and John had whilst Elizabeth was ill 'John-I am waitin' for you every night.' However John, even though he still has feelings for Abigail 'I may think of you softly.' He does not go back to her as he knows that he had betrayed Elizabeth 'angered-at himself' and that angers him as there are still feelings between him and Elizabeth which he wishes to savour. ...read more.

I feel Miller shows the Proctor's almost rebirth of a relationship when Elizabeth is taken away as this the part when John truly sticks up for his wife in front of her 'You will not go!' as this is the part where his hidden feelings from Act 1 have come out for Elizabeth to see. In Act 3 whilst Proctor is in the court with Mary to defend those accused even his wife Elizabeth, we hear that she is pregnant, unknown to John he claims that 'that woman will never lie' as Proctor believes that he knows Elizabeth as a pure woman as they have had a long relationship. However when John admits to having an affair with Abigail and Elizabeth is asked about the matter whether the affair was true or not she replies 'No sir' as she now wishes to Protect John and so lies for him. This shows a strengthening in love between them both as Elizabeth is willing to lie for John 'is your husband a lecher!' Elizabeth replies 'No, sir', but lying is against biblical teachings and was believed that it could be used against people at judgement day so it shows the lengths she will now go to from John. However there is still a weakness in the relationship between John and Elizabeth as John thought that Elizabeth could not lie for him and that she would be pure ...read more.

For example John fights to save Elizabeth when she is taken away however at the end of Act 4 Elizabeth does not fight Johns decision. And this may be because she respects him so or it may be that she recognises the end. To conclude, I feel that at the start of the play John realises that what he did to Elizabeth was wrong and he does not wish to go back to that, so already he wishes to protect her. However their relationship was still stale and cold between them both until Elizabeth found out that she was accused of witchcraft. And then she needed to trust John to speak to Abigail and John had a new found love for Elizabeth as he felt he needed to protect her. As the court scene developed they both learnt something new about each other and the ways in which they react to different situation, and I feel that it is the start of the coming together of their relationship. But it is only during Act 4 when Elizabeth is trying to persuade John to admit to seeing the devil that I feel their relationship is re-built. But I still feel that Elizabeth was not the same with John after the affair as at the end of the play and in echoes down the corridor she moves on too easily. ...read more.

This essay is well structured and chronologically works through the play. Statements are sometimes perceptive and well supported by quotes. The writer clearly knows and understands the main themes of the play. Lapses in expression make meaning unclear in places. Some repetition of words, phrases and ideas.