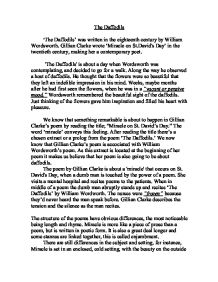 The Daffodils 'The Daffodils' was written in the eighteenth century by William Wordsworth. Gillian Clarke wrote 'Miracle on St.David's Day' in the twentieth century, making her a contemporary poet. 'The Daffodils' is about a day when Wordsworth was contemplating, and decided to go for a walk. Along the way he observed a host of daffodils. He thought that the flowers were so beautiful that they left an indelible impression in his mind. Weeks, maybe months after he had first seen the flowers, when he was in a "vacant or pensive mood," Wordsworth remembered the beautiful sight of the daffodils. Just thinking of the flowers gave him inspiration and filled his heart with pleasure. We know that something remarkable is about to happen in Gillian Clarke's poem by reading the title; "Miracle on St. David's Day." The word 'miracle' conveys this feeling. After reading the title there's a chosen extract or a prolog from the poem 'The Daffodils.' ...read more.

In stanza one he explains, whilst he 'wandered lonely as a cloud' he saw a host of 'golden daffodils.' He was stunned by the radience of the daffodils. The word 'golden' that he uses to describe the daffodils makes them seem precious and royal. He believes that these certain flowers were special as they gave him such inspiration. He also describes them as being happy and joyful as they are "fluttering and dancing in the breeze" We see an example of aliteration in this first stanza: "Beside the lake, beneath the trees fluttering and dancing in the breeze" this gives the last couplets a rhythm and a beat. We also see a simile "I wandered lonely as a cloud" and a metaphor, "fluttering and dancing" These devices brings the poem to life and we can imagine ourselves dancing beside the daffodils! In stanza two, Wordsworth has exaggerated the number of daffodils that he can see and compares them by saying "continuous as the stars that shine" and "they stertched in never-ending line." ...read more.

When he pictures these daffodils, he is filled with happiness and pleasure and his heart "dances with the daffodils." He now realises the true beauty of the daffodils and what an effect they had on him that day. The metaphor used in this last stanza - "And then my heart with pleasure fills and dances with the daffodils" - informs us how the poet feels when thinking of the flowers. He also writes in first person, so it proves that the daffodils were something he saw, something that affected him personally. The rhythm used allows him to create the magical effect of beauty with the words he uses. It is set out in four verses, all using the same meter and rhyming scheme and all with the same layout. In my opinion, Wordsworth has used poetic devises very carefully without inserting too many in his poem. The metaphors, similes, personification, aliteration and repetition that he uses in the poem, bring life to the daffodils and inspiration to the reader. ...read more.