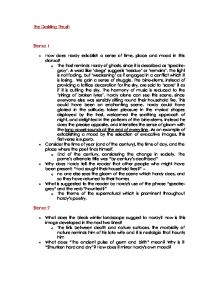 The Darkling Thrush, The Voice, The Going and The Convergance of the Twain revision notes

The Darkling Thrush Stanza 1 * How does Hardy establish a sense of time, place and mood in this stanza? o The frost reminds Hardy of ghosts, since it is described as 'spectre-gray'. A word like 'dregs' suggests 'residue' or 'remains'. The light is not fading, but 'weakening' as if engaged in a conflict which it is losing. We gain a sense of struggle. The bine-stems, instead of providing a lattice decoration for the sky, are said to 'score' it as if it is cutting the sky. The harmony of music is reduced to the 'strings of broken lyres'. Hardy alone can see this scene, since everyone else was sensibly sitting round their household fire. This could have been an enchanting scene. Hardy could have gloried in the solitude; taken pleasure in the myriad shapes displayed by the frost, welcomed the soothing approach of night, and delighted in the patterns of the bine-stems. Instead he does the precise opposite, and intensifies the sense of gloom with the long vowel sounds at the end of every line. As an example of establishing a mood by the selection of evocative images, this first verse is superb. * Consider the time of year (and of the century), the time of day, and the place where the poet finds himself. o End of the century, considering the change in society. The pome's altrenate title was "by century's deathbed" * Why does Hardy tell the reader that other people who might have been present: "Had sought their household fires?" - o no one else sees the gloom of the scene which hardy does, and so they have returned to their homes * What is suggested to the reader by Hardy's use of the phrase "spectre-grey" and the verb "haunted?" ...read more.

This reflects on Hardy's mood and decision that he must move forward and Emma's voice is imaginary. This conveys the sense of misery that he is feeling. This contrasts to the beginning of the poem which is optimistic. Hardy wrote this poem due to the guilt of not taking care of Emma when she was sick. They both had an estranged relationship. He is obviously somewhat lost without her and his grieving has left him with memories that appear to play tricks on his mind. They loved each other but it was a destructive love; perhaps the most powerful kind. Maybe the wind was to blow that pain away or was it a part of the force of destructive that was their relationship. The last stanza is chaotic. The wind has blown it all apart. The repetitive vowel sounds, however, create some unity as the link each word together. The words merge. They become the wind; they become the echoing voice. Hardy and Emma were separated at the time of her sudden unexpected death. He wrote several poems which reflect the stages of grief he is experiencing and this is largely believed to be the poem he wrote at the point of recovery. Critics have suggested that the voice could be calling him to death and hardy is contemplating suicide, before recovering. In the last stanza he realizes that he can't go on seeing his wife in places she doesn't exist. She is dead and although he will always think of her he can't change the terms on which they parted and he feels alone and depressed. ...read more.

She is, but he does not know this, even though he speaks as if to Emma's "faithful phantom". Hardy's deep love of nature appears in his choice of the places where he walks, the haunts of those given to reverie (daydreaming or contemplation): where the hares leave their footprints, or the nocturnal haunts of rooks. He also visits "old aisles" - are these literally the aisles of churches or natural pathways in woods and copses? In all these places Emma's ghost keeps as close as "his shade can do". "Shade" is ambiguous: it is used here to mean "shadow" (Emma is as close as his own shadow to Hardy) but the term more usually means "ghost" - which is evidently very appropriate here. Again, Emma notes that she cannot speak to Hardy, however hard she may strive to do so. Emma implores the reader to inform Hardy of what she is doing, with the almost desperate imperative: "O tell him!" She attends to his merest sigh, doing "all that love can do" in the hope that "his path" may be worth the attention she lavishes on it, and in the hope that she may bring peace to Hardy's life. The lyrical trochaic metre and subtly linked rhyme scheme seem in keeping with the optimistic content of the poem, unlikeThe Going, in which the liveliness jars with the sombre, self-pitying character of the piece. In The Going Hardy reproaches Emma, for leaving him without warning. Here he celebrates her essential fidelity and benevolence, which she retains, even in death. While the idea of Emma as the faithful phantom is, of course, entirely fanciful, it is strikingly plaintive and touching. ...read more.