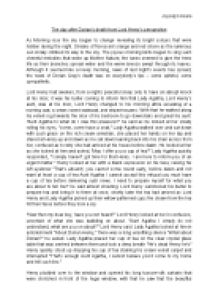 The day after Dorians death from Lord Henrys perspective

﻿Joycelyn Asare The day after Dorian?s death from Lord Henry?s perspective As Morning rose the sky began to change revealing its bright colours that were hidden during the night. Streaks of florescent orange and red shone as the luminous sun slowly climbed its way to the sky. The joyous morning birds began to sing such cheerful melodies that woke up Mother Nature; the tunes seemed to give the trees life as their branches spread wider and the warm breeze swept through its leaves. Although it seemed like a lovely morning, news of last night?s events has spread; the news of Dorian Gray?s death was on everybody?s lips ? some spiteful, some sympathetic. Lord Henry had awoken, from a nights peaceful sleep only to have an abrupt knock at his door; it was his butler coming to inform him that Lady Agatha, Lord Henry?s aunt, was at his door, Lord Henry changed to his morning attire consisting of a morning coat, a cream ironed waistcoat, and striped trousers. ...read more.

?Now then my dear boy, have you not heard?? Lord Henry looked at her in confusion, uncertain of what she was babbling on about. ?Aunt Agatha I simply do not understand, what are you on about?? Lord Henry said. Lady Agatha looked at him in astonishment ?About Dorian Henry,? there was a long unsettling silence ?What about Dorian?? he asked. Lady Agatha placed her cup of tea on the clear crystal glass table that was centred between them and took a deep breath ?He?s dead Henry he?s? Henry quickly stood up dropping his cup of tea staining his cream velvet carpet and interrupted ?That?s enough Aunt Agatha, I cannot believe you?d come to my home and tell such lies.? Henry plodded over to the window and opened his long tussore-silk curtains that were stretched in front of the huge window, with that he saw that the beautiful morning he had woken up to had quickly disappeared as the skies had turned grey; the joyous melodies the birds once sang had vanished, ...read more.

After all he never did age. Thoughts of why Dorian could have died played on in his mind for a while until he hastily walked up over, fetched his coat and thought are these rumours I hear of my boy Dorian true? The only way to separate the truth from lies is for one to see it with his own eye. With that he closed his finely carved oak door and walked onto the ash coloured pavement, which had been heavily hit with the harsh unpleasant showers. Slowly with his head down walked off into the distance thinking of the possibilities of there being truth to these rumours; that he may have been hit with pure misfortune in losing a friend, a man he had described once as being some brainless, beautiful creatures, who should be always here in winter when we have now flowers to look at, and always here in summer when we want something to chill our intelligence. Word count: 1003 ...read more.