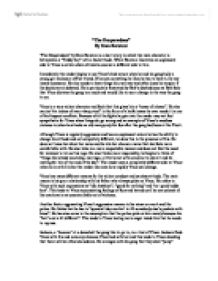 "The Desperadoes" By Stan Barstow "The Desperadoes" by Stan Barstow is a short story in which the main character is betrayed as a "Teddy boy" with a bad attitude. While Barstow illustrates an unpleasant side to Vince a certain chain of events uncover a different side to him. Immediately the reader begins to see Vince's bad nature when he and his gang bully a young girl and scare off her friend. If he sees something he likes he has to have it, by any means necessary. He also needs to have things his own way and often loses his temper if his decisions are debated. He is particularly frustrated by Bob's disobedience as Bob feels that Vince dictates the gang too much and would like to see a change in the way the gang is run. ...read more.

He does not tease her about her name and he lets her choose a name that she feels more comfortable with. He also talks in a more respectable manner and does not feel the need for violence to let out his rage. He also thinks more responsibly, he begins to think of "things like steady courtship, marriage, a little home with someone to share it and be waiting for him at the end of the day". The reader sees a completely different side to Vince when he is with Iris but the reader also sees how rapidly Vince can change. Vince has many different reasons for his violent conduct and careless attitude. The main reason is his poor relationship with his father who always picks on Vince. ...read more.

He arranges with his gang that they shall "jump" Jackson later that night. The gang's intention was to shake Jackson up but the conflict resulted in the death of Jackson and Vince being held responsible with the Eddie Nisbet 3B2 murder. They only wanted to "get that bugger" for the pain and anguish he had inflicted on Vince. The conflict did not go to plan as Jackson overpowered the gang and left Vince no alternative other than stabbing Jackson in an act of self-defence. This proves to be a fatal blow and the gang flee leaving Vince on his own. The reader may choose to sympathise with Vince or they may feel Vince's actions led to his own downfall. Either way there are many reasons for and against Vince's actions but there can be no excuse for murder. ...read more.