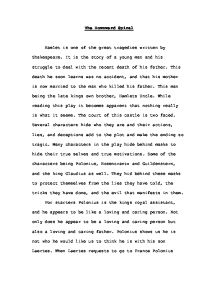 The Downward Spiral of Hamlet.

The Downward Spiral Hamlet is one of the great tragedies written by Shakespeare. It is the story of a young man and his struggle to deal with the recent death of his father. This death he soon learns was no accident, and that his mother is now married to the man who killed his father. This man being the late kings own brother, Hamlets Uncle. While reading this play it becomes apparent that nothing really is what it seems. The court of this castle is two faced. Several characters hide who they are and their actions, lies, and deceptions add to the plot and make the ending so tragic. Many characters in the play hide behind masks to hide their true selves and true motivations. Some of the characters being Polonius, Rosencrantz and Guildenstern, and the king Claudius as well. They hid behind these masks to protect themselves from the lies they have told, the tricks they have done, and the evil that manifests in them. For starters Polonius is the kings royal assistant, and he appears to be like a loving and caring person. Not only does he appear to be a loving and caring person but also a loving and caring father. Polonius shows us he is not who he would like us to think he is with his son Laertes. ...read more.

To see why is acting so crazy, Claudius wants to know the root of Hamlets actions. Hamlet welcomes his old friends, yet he knows why they have come to visit him. Hamlet is very careful not to allow them to see or hear what is truly wrong with him; he wants everyone to think he has just lost his mind. Hamlet being aware of Rosencrantz and Guildenstern purpose for their visit abuses them verbally. He makes fun of them when he can. And he calls them on their lie. After the play when they act sad and upset that Hamlet won't tell them what ails him, Hamlet gives it to them. "You play upon me, you would seem to know my stops, you would pluck out the heart of my mystery, you would sound me from my lowest note to the top of my compass. And there is much music, excellent voice, in this little organ, yet you cannot make it speak." (III, ii, 372-376) Hamlet knows why they are there and is careful not to let them in on his madness. Rosencrantz and Guildenstern add to the tragic ending because Hamlet feels betrayed by someone else, and his portrayal of madness goes on until the end. It is a spiral of destruction, and every characters lies, and deceptions add to it, making it spin faster, and get bigger. ...read more.

He plays on Laertes emotions, his grief and anger. Claudius uses these emotions to lure Laertes into a plan to kill Hamlet. After Claudius playing on Laertes emotions he asks him, what will you do when hamlet returns? And Laertes now filled with ideas and rage responds" to cut his throat I' the church." (IV,vii,126) Claudius acts a caring friend in this time of grief, acting as someone Laertes can talk to help sort things out, yet he is tricking him to conspire to murder Hamlet. Claudius hiding behind a mask through out the play help add to the spiral, and tragic ending because for starters he killed the king causing this whole thing to begin with. Then plots to have hamlet killed, see that didn't work, so sets up a dual between Laertes and Hamlet and rigs it so Hamlet will die, of poison. Though the cup that Claudius poisoned for Hamlet, his loved wife drinks, creating the end the come quickly in the play and with a more dramatic ending. In conclusion, the characters of Hamlet hid their true personalities and motives in order to gain more for them, yet by doing so they propel the downward spiral, and greaten the tragic ending. The constant betrayal, lies, and manipulations in this play cause each character to act almost hysterical so quickly it all collides and the end is the end for almost everyone. The Downward Spiral By, Morgan Keenan Edwina Trentham Introduction to Lit. Tue. am ...read more.

There are lots of points in this essay but they are not connected with any real structure which means the writing lacks direction.
It is important to remember to analyse the key points; language, structure, form and the impact these all have on the audience. This essay slips into the narrative on too many occasions.