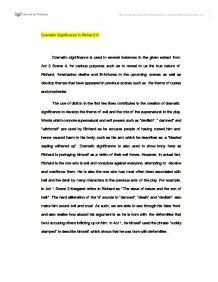 The Dramatic Significance of Act 3.4 of Richard III

Dramatic Significance in Richard III Dramatic significance is used in several instances in the given extract from Act 3 Scene 4, for various purposes such as to reveal to us the true nature of Richard, foreshadow deaths and ill-fortunes in the upcoming scenes as well as develop themes that have appeared in previous scenes such as the theme of curses and prophesies. The use of diction in the first few lines contributes to the creation of dramatic significance to develop the theme of evil and the role of the supernatural in the play. Words which connote supernatural and evil powers such as "devilish", "damned" and "witchcraft" are used by Richard as he accuses people of having cursed him and hence caused harm to his body, such as his arm which he describes as a "blasted sapling withered up". Dramatic significance is also used to show irony here as Richard is portraying himself as a victim of their evil forces. However, in actual fact, Richard is the one who is evil and conspires against everyone, attempting to deceive and overthrow them. ...read more.

Also, the use of "If" in his next response to Richard gives us a clear hint of the split between them as it is evident that he doubts Richard's words. Dramatic significance is also used to foreshadow the evil that is to come. For example, when Hastings says that whoever offends Richard "deserved death", he is digging his own grave as he is unknowingly granting 'permission' for Richard to have him executed. He is unaware that Richard would soon throw accusations on him and have him killed. Hence, Hastings's death is foreshadowed. Another instance where death is foreshadowed is at the end of the extract when Hastings says that England will experience "fearful'st time to thee/That ever wretched age hath looked upon" and that his executioners Lovell and Ratcliffe "shortly shall be dead". This also highlights the theme of curses and prophesies as these curses and prophesies actually come to pass towards the end of the play when Richard and his allies get defeated. In many other cases, curses have been fulfilled but the receivers of the curses or bad omens are ignorant of them and hence are not cautious of the danger that they will face and are unable to avoid them. ...read more.

Lastly the stage directions in the extract are relevant in creating dramatic significance to show Richard's forceful nature and power to control the behaviour of the noblemen and rope in their support. Firstly, he shows how easily he can call for an execution of someone by saying "Off with his head. Now by Saint Paul I/Swear...look that it be done", making it sound all religious and official. After which, he says, "The rest that love me, rise and follow me" almost as if he were threatening those who stay behind with the same ending as what he had just caused for Hastings. As a result, the stage directions in response to Richard's ending line is "Exeunt [all but] LOVELLE and RATCLIFFE, with the LORD HASTINGS", showing us that the rest do fear Richard, his power, and that they understand the danger of losing their lives. This is also felt by Hastings as he describes him as "O bloody Richard!". Hence, dramatic significance has been used effectively in the given extract to help us readers better understand the play and the message and ideas that Shakespeare is trying to convey. ...read more.