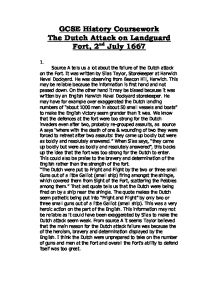 GCSE History Coursework The Dutch Attack on Landguard Fort, 2nd July 1667 1. Source A tells us a lot about the failure of the Dutch attack on the Fort. It was written by Silas Taylor, Storekeeper at Harwich Naval Dockyard. He was observing from Beacon Hill, Harwich. This may be reliable because the information is first hand and not passed down. On the other hand it may be biased because it was written by an English Harwich Naval Dockyard storekeeper. He may have for example over exaggerated the Dutch landing numbers of "about 1000 men in about 50 small vessels and boats" to make the English victory seem grander than it was. We know that the defences at the fort were too strong for the Dutch invaders even after two, probably re-grouped assaults, as source A says ''where with the death of one & wounding of two they were forced to retreat after two assaults: they came up boldly but were as boldly and resolutely answered." When Silas says, "they came up boldly but were as boldly and resolutely answered", this backs up the idea that the fort was too strong for the Dutch to enter. This could also be praise to the bravery and determination of the English rather than the strength of the fort. "The Dutch were put to Fright and Flight by the two or three small Guns out of a little Galliot (small ship) firing amongst the shingle, which covered them from Sight of the Fort, scattering the Pebbles among them." That last quote tells us that the Dutch were being fired on by a ship near the shingle. The quote makes the Dutch seem pathetic being put into "Fright and Flight" by only two or three small guns out of a little Galliot (small ship). This was a very heroic action on the part of the English. This information may not be reliable as it could have been exaggerated by Silas to make the Dutch attack seem weak. ...read more.

My site record also tells me a lot about why the Dutch attack failed. The Dutch landing site was about 2 miles away from the Fort. Although this site provided cliff protection and time to unload, it also meant that the troops would have a long march before the battle therefore the men would not be at their best during the battle. As both source E and my site record confirm the Dutch troops split up at the end of the cliffs and about 400-500 men were left to guard a pass so that the English did not attack from the rear. It was not suspected at the time that these men would be needed. Although no physical evidence remains to show fort was surrounded by open ground I saw a model in the museum close to the fort which shows the fort and the environment around it at the time of the Dutch attack. The model showed that the fort was surrounded by open green land which would have made spotting the Dutch very easy and the fort easily had enough range to allow the English to fire at the Dutch before the Dutch could even get close to the fort. The position of the fort also revealed that it was very well sited to spot the approach of the Dutch as it had a good view of the North Sea. The morale of the soldiers would have been very low as they went into battle as once they saw the fort's defences and that it was undamaged they would have known that victory would be near impossible and that many men would die. The failure of the sea attack which left the fort undamaged would have been one of the greatest reasons of why the Dutch attack failed as the men had no chance of taking the undamaged fort. Unfortunately there is very little evidence left of the Dutch attack on the fort to study as the original fort no longer stands. ...read more.

By 1664 Charles II restored the monarchy of England and the two countries engaged in frequent clashes in the East Indies, Africa and America. The English were confident of a victory as the defeated the Dutch in the first war and the war was going well for them to begin with. The crushing Dutch defeats led to the death of the Dutch Admiral. The new commander of the Dutch Navy began to rebuild the fleet and changed the balance of the war. In the great four day battle of June 1666 the Dutch made good use of superior numbers and defeated the English. The war began to get better for the Dutch and many would have become confident of a victory. This possibly over confidence may have remained up to the time of the Dutch attack on Landguard fort and so the Dutch may not have been as dedicated to the attack as they would have been had they not been defeating the English in many of their previous battles. The Medway attack would have made many Dutch very confident when attack the English another time. The Medway attack went very well for the Dutch. Prior to the attack the Dutch were busy refitting and building a massive fleet of ships while the English government was rather slow to prepare for another Dutch attack. Some English ships were taken out of service in the winter and were not refitted ready for the 1667 campaign. The battery guns at Sheerness were not finished properly. During the attack the Dutch ploughed through many of the English's finished defences and even captured a English warship which was taken back to Holland as a prise of war. This would have made many Dutch over confident when they met the English again and therefore under prepared to face the now stronger English. Overall I think the Dutch could have been more dedicated to the attack but I don't know if this could have changed the overall outcome of the battle at Landguard. ...read more.