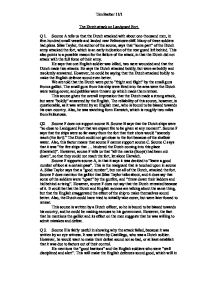 The Dutch attack on Landguard Fort.

He could have played down the number of Dutch troops and exaggerated the English defences to make their defeat sound less bad. Q 4. The intention of the sea attack was to destroy most of the fort so that the ground troops could just mop up the survivors. However, there were several difficulties in doing this. The main structure of the fort was made from compressed earth, called Earthenware. This enables the structure to absorb the force of cannonballs, hence the importance of the Dutch ships getting close to the fort. This, however, was made difficult by shallow water and sand banks near the fort. Source F tells us that the ships were "not able to sail close to the fort". There was only a small channel that the ships could have sailed down without getting stuck, which was marked out with buoys. However, the Dutch could not follow these, as "all the marks had been cut down". This is one reason for the failed attack, as for the ships to do any damage to the earthenware fort they would have had to get very close. Admiral Van Nes did get stuck on one of the sandbanks, and wasted a lot of valuable time that could have been used for the attack. ...read more.

This shows us how much thought was put into defending the landing site, as they would have wanted to make a quick escape in case of the likely retreat. Also, the amount of casualties suffered by the Dutch, suggests the attack was half hearted. Source G tells us there were "not more than seven killed and thirty-five wounded." A full blown, determined attack would surely have more casualties. This also could have been linked to De Ruyter's reluctance to commit large forces to attack. It is likely he did not want to risk any unnecessary victims, especially when he was aware of the task facing him. Also, while this attack was happening, peace negotiations were being held in Breda. After the Dutch victory in the Medway, they had the upper hand in negotiating a deal. De Ruyter would have wanted to avoid a disaster at Landguard that could have changed the balance of power in the negotiations. This victory was not essential, but keeping his fleet together and in control of the English Channel was. Overall, I think that the Dutch attack was not committed enough, but this was planned by De Ruyter, He knew the strength of the English fort, and did not want to risk any unnecessary casualties. Tim Barber 11/1 ...read more.