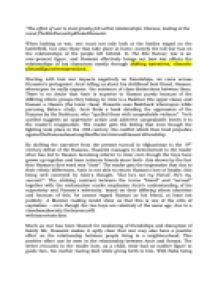 The effect of war is most greatly felt within relationships. Discuss, looking at the novel, The Kite Runner by Khaled Hosseini.

Transfer-Encoding: chunked ﻿?The effect of war is most greatly felt within relationships. Discuss, looking at the novel, The Kite Runner by Khaled Hosseini. When looking at war, one must not only look at the battles waged on the battlefield, but also those that take place at home, namely the toll war has on the relationships of the people left behind. In The Kite Runner, war is an ever-present figure, and Hosseini effectively brings out how war affects the relationships of his characters mostly through shifting narratives, climactic plot and figurative expressions. Starting with how war impacts negatively on friendships, we come across Husseini?s protagonist, Amir telling us about his childhood best friend, Hassan, whereupon he sadly exposes the existence of class distinctions between them. There is no doubt that Amir is superior to Hassan purely because of the differing ethnic groups they belong to: Amir is a Pashtun (the upper class), and Hassan a Hazara (the lower class). Hosseini uses flashback whereupon while perusing Baba's study, Amir finds a book detailing the oppression of the Hazaras by the Pashtuns, who '?quelled them with unspeakable violence?'. ...read more.

This positive effect can be seen in the relationship between Amir and Soraya. The writer recounts to the reader how, as a child, Amir had no mother figure to guide him, his mother having died while giving birth to him. With Baba being the principled and hard-to-please man that he is, the only adult Amir could rely on was Rahim Khan who ?always...rescued him?, the choice of verb ?rescued? metaphorically suggesting what a relief it was for Amir to have Rahim Khan by his side whenever he felt his father?s disapproving eyes angrily peering at him. But due to the 1983 invasion by the Soviets, Amir and Baba are forced to leave Afghanistan and seek refuge in America. To this effect, war can be blamed for disrupting the relationship between Amir and Rahim Khan. The above notwithstanding, it is worth pointing out that it is due to Amir?s migration to America that he meets Soraya Taheri whom he falls deeply in love with. A psychoanalytical reader would relate Amir's love for Soraya to the Oedipus complex, to the extent that it seems Amir finds the mother he never had in Soraya due to the traits they share. ...read more.

He also withdraws into himself and avoids human company because he believes he is ?dirty and full of sin?, the metaphor ?dirty? in this case suggesting Sohrab?s feeling of ritual uncleanliness and the abstract noun ?sin? drawing attention to the boy?s feeling of unworthiness before God. That anyone could rape a boy of no more than eleven years and throw him into a miasma of confusion and paranoia simply because war made it possible for them to do so and get away with it, is a serious indictment on war and a proof of how inimical war is to the development of effective human relationships. It can therefore be seen that war bears strongly not only on the battlefield, but also on the lives of the people left at home. In The Kite Runner, therefore, we see how some of the relationships the characters share are shaped by war while others are destroyed by it. This makes war some sort of a mixed blessing given its capacity to deepen some relationships and disrupt others at the same time. No wonder some war scholars have concluded that indeed war is a necessary and inevitable part of being human. ...read more.