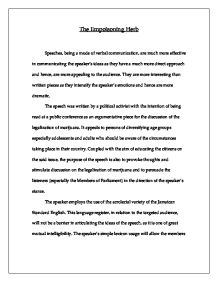 The Empoisoning Herb Speeches, being a mode of verbal communication, are much more effective in communicating the speaker's ideas as they have a much more direct approach and hence, are more appealing to the audience. They are more interesting than written pieces as they intensify the speaker's emotions and hence are more dramatic. The speech was written by a political activist with the intention of being read at a public conference as an argumentative piece for the discussion of the legalization of marijuana. ...read more.

in the direction of the speaker's stance. The speaker employs the use of the acrolectal variety of the Jamaican Standard English. This language register, in relation to the targeted audience, will not be a barrier in articulating the ideas of the speech, as it is one of great mutual intelligibility. The speaker's simple lexicon usage will allow the members of all social classes to effectively decode the speech. The use of this register is also successful in reinforcing the speaker's serious, concerned, yet proficient tone. ...read more.

For example, "As proven by the DHA ... 82.6%... / more than 400 chemicals in marijuana..." The presentation of these logical facts to buttress the speaker's opinionated negative ideology of the drug lends to the validity of the speech and consequently, the level of interest on the part of the listeners is maintained through this creative articulation. In concluding, the speaker chose to reaffirm his stance on the legalization of marijuana and this complementarily persuades the listeners. The speaker ends the speech with an affirmative tone, "Out of many one people, we must choose not to legalize it!" The Jamaican Motto is used here to evoke emotional intensity and a strong sense of urgency for unified action. ...read more.