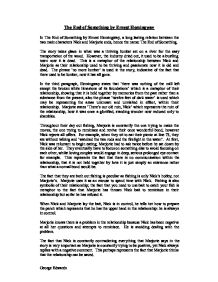 The End of Something by Ernest Hemingway.

The End of Something by Ernest Hemingway In The End of Something by Ernest Hemingway, a long lasting relation between the two main characters Nick and Marjorie ends, hence the name: The End of Something. The story takes place in what was a thriving lumber set on a river for the easy transportation of the wood. However, the industry dried out, it used to be a bustling town now it is dead. This is a metaphor of the relationship between Nick and Marjorie as their relationship used to be thriving and passionate now it is old and dead. The phrase 'no more lumber' is used in the story, indicative of the fact that there used to be lumber, now it has all gone. In the third paragraph, Hemingway states that 'there was nothing of the mill left except the broken white limestone of its foundations' which is a metaphor of their relationship, showing that it is held together by memories from the past rather than a substance ...read more.

This represents the fact that there is no communication within the relationship, that it is not held together by love it is just simply an existence rather than what a normal bond would be. The fact that they are both out fishing is peculiar as fishing is only Nick's hobby, not Marjorie's. Marjorie uses it as an excuse to spend time with Nick. Fishing is also symbolic of their relationship; the fact that you need to use bait to catch your fish is metaphor to the fact that Marjorie has thrown Nick bait to reminisce in their relationship but so far he has refused it. When Nick and Marjorie lay the bait, Nick is in control, he tells her how to prepare the perch which represents that he has the upper hand in the relationship: he is always in control. Marjorie knows there is a problem in the relationship because Nick has been negative at all her questions and attempts to reminisce. ...read more.

to catch Nick and to revive the relationship. She thinks it can be done however Nick doesn't as he is constantly contradicting everything she says and does. The end of the story is significant as this is the time that Nick reveals that he ends the relationship, 'The End of Something' as mentioned in the title of the story. The fact that his friend 'Bill' asks him if 'she went all right' suggests to the reader that Nick has been planning this in advance, a sad and scheming way to do things because he has let someone else know what he has been planning when he should have been keeping things to himself. However, in the second to last line of the story, Nick rages towards Bill: 'Oh, go away, Bill! Go away for a while.' This suggests that Nick happened to be feeling either guilty or upset with the happenings before hand and he wants some time, by himself, to contemplate and to think things over. Hence, he tells his friend Bill to 'go away for a while'. George Edwards ...read more.