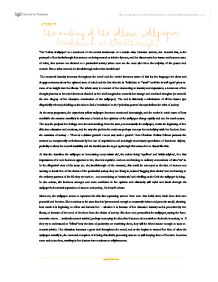 The ending of The Yellow Wallpaper. Breakdown or Breakthrough

'The Yellow Wallpaper' is a document of the mental breakdown of a middle class Victorian woman, but beneath this, is the portrayal of her breakthrough that women are being treated as inferior by men, and her discovery in her insane and insecure state of mind, that woman are chained to a patriarchal society where men are the ones who have the majority of the power and control. But to what extent is it a breakthrough rather than breakdown? The narrator's insanity increases throughout the novel and the reader becomes aware of this by her language; her short and choppy sentences show her agitated state of mind and the fact that she is 'forbidden to "work" until she is well again' gives us more of an insight into her illness. The whole story is a record of her descending to insanity and depression, a document of her thought patterns as her mind becomes clouded as her vivid imagination unravels her strange and confused thoughts (or unravels the true allegory of her obsessive examination of the wallpaper). The end is ultimately a culmination of all her insane (yet allegorically relevant) thinking as she tries to find a 'conclusion' to the 'pointless pattern' that symbolizes the rules of society. As the story progresses, the mysterious yellow wallpaper becomes mentioned increasingly, and the reader is made aware of how unreliable the narrator actually is in this state of mind as her opinions of the wallpaper change rapidly and not for much reason. The way she projects her feelings onto her surroundings from the start, not necessarily the wallpaper, marks the beginning of her slide into obsession and madness, and the way she prefers the outdoors perhaps conveys her underlying wish for freedom from the restraints of society - 'There is a delicious garden! ...read more.

there are things in that paper that nobody knows but me'. The reason she does not want to share it could be because she does not want to share the awful secret; that of patriarchy destroying women's lives in ways they do not understand, and will not understand unless they are driven as insane as she is. She says 'I am too wise', perhaps showing her belief that her knowledge of this 'secret' is eventually tragic for her in ways she cannot even understand herself, showing how she had to break down in her unravelling of the secret of the wallpaper in order to recognize what it represents. Moreover, when she sees John 'looking at the paper!' and catches Jennie 'with her hand on it once', she is distressed and even more 'determined that nobody shall find it out' but herself. She hates the fact that they are part of the system that is keeping her so trapped, and does not seem to want to believe that they are against her. As she gets more determined to keep her investigation of the wallpaper a secret, we begin to feel she is planning a display of her discovery when she has unravelled the true and entire meaning of it. 'I think that woman gets out in the daytime! And I'll tell you why - privately - I've seen her!' - here her excitement about her further discoveries of the pattern behind the wallpaper shows her growing passion and obsession for discovering the truth, and we are left wondering what she will do when she does discover the truth for herself. ...read more.

The creepy and chilling culmination of her total breakdown and the fact she has to 'creep over him [John] every time!' also adds to her insanity, and the reader is left either admiring her breaking free from the chains of society, or feeling pity for her due to the fact that she has not broken free at all; she still has to 'creep over him', implying how she as a woman still has to live with the fact that the prejudice society has on her will always be there, and is perhaps left thinking that the only way to break free of society is to go completely insane. In this way, the ending is almost a way of Charlotte Perkins Gilman saying that in order to experience a breakthrough and discover how to break free of society, you have to undergo an entire breakdown. In conclusion, the ending of the Yellow Wallpaper is a culmination of the rapid breakdown of a woman barred by the rules of society, and who gradually gains insight into why she has felt so restricted in the past as she becomes more and more insane. Charlotte Perkins Gilman uses the narrator's perhaps metaphorical mental 'breakdown' in order to portray her 'breakthrough' that women are very much being restricted by patriarchy, and the ending is a display of this woman's understanding of this idea, although she has to be driven completely insane to appreciate what has been holding her back and driving her insane in the first place. So, the ending is in fact both a breakdown for the narrator and a breakthrough as she is ultimately driven mad in order to convey the idea of patriarchy greatly affecting society in general. ?? ?? ?? ?? 22nd October '10 English Literature ...read more.