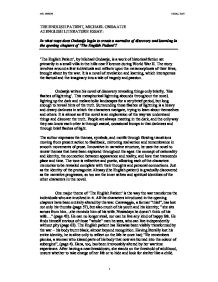 THE ENGLISH PATIENT, MICHAEL ONDAATJE A2 ENGLISH LITERATURE ESSAY: In what ways does Ondaatje begin to create a narrative of discovery and learning in the opening chapters of 'The English Patient'? 'The English Patient', by Michael Ondaatje, is a work of historical fiction set primarily in a small villa in the hills near Florence during World War II. The story revolves around a few individuals and reflects upon the metamorphosis of their lives, brought about by the war. It is a novel of revelation and learning, which intersperses the factual and the imaginary into a tale of tragedy and passion. Ondaatje writes his novel of discovery revealing things only briefly, 'like flashes of lightning'. This metaphorical lightning abounds throughout the novel, lighting up the dark and melancholic landscapes for a very brief period, but long enough to reveal hints of the truth. Surrounding these flashes of lightning is a heavy and dreary darkness in which the characters navigate, trying to learn about themselves and others. It is almost as if the novel is an exploration of the way we understand things and discover the truth. People are always meeting in the dark, and the only way they can know each other is through casual, occasional bumps in that darkness and through brief flashes of light. ...read more.

She chooses to postpone her decision, and builds a resolution, to nurse and "remain with the one burned man they called 'the English patient'", (page 54). Accordingly, the war has taken a piece of each character's identity, replacing it with a scar that each now bears and discovers from the other. Symbolically, just as Almasy has mapped the landscape of the 'shifting desert', he tries to map Katharine. Yet he cannot, which makes him so intrigued and want to know about her - the special qualities she possesses, those he is incapable of colonising. An important and recurring symbol in the novel is the Italian villa in which Hana and the English patient reside. The setting of the war torn villa reflects the damage in it's inhabitants lives. Ondaatje writes, "there seemed little demarcation between house and landscape, between damaged building and the burned and shelled remnants of the earth". Such an organic image is allegorically important to the novel; straddling the line between house and landscape, building and earth, the villa signifies both death and rebirth. War has destroyed the villa, making huge holes in its walls and ceilings. Despite so, nature returns to fill these holes, replacing the absences with life. This image mirrors the spiritual death and rebirth of the villa's inhabitants. ...read more.

Besides, it is ironic to note that love that stems during war is factually all-conquering, only due to the hardship and barriers that the individuals overcome together. Focussing on the character of Kip, he is first introduced only as "the Sikh". He is polite and well-mannered, and has both the skill and character to be an excellent "sapper". A coloured man in a white nation, Kip has grown emotionally detached, aware that people will not always react positively to him. His emotional detachment stands in the way of his relationships, most significantly his relationship with Hana. Much of the emotional distance Kip builds for himself is a result of his incredibly dangerous job in the war. As a man who must descend into deep pits to defuse bombs that could explode at any time, he comes to grips with the idea of his own mortality. His job has taught him to distrust everything and everyone. Yet in the Italian villa, he becomes a part of the small community that has sprouted there and learns positive prospects towards life. Ondaatje's blend of prose and poetry, evoking images and emotions with highly lyrical language allows the elements of learning and discovery to permeate the characters' relationships throughout the course of the novel. ?? ?? ?? ?? MR. ANSON FARAZ. RAFI 1 ...read more.