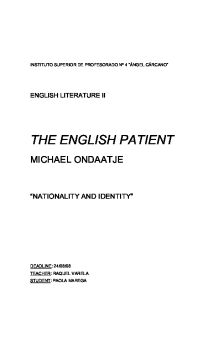 INSTITUTO SUPERIOR DE PROFESORADO N� 4 "�NGEL C�RCANO" ENGLISH LITERATURE II THE ENGLISH PATIENT MICHAEL ONDAATJE "NATIONALITY AND IDENTITY" DEADLINE: 24/08/08 TEACHER: RAQUEL VARELA STUDENT: PAOLA MAREGA Nationhood - a constraint on people's identity and relationships The English Patient, written by Michael Ondaatje in 1992, is a historical-fiction novel, defined also as historiographic metafiction1. Its tone is "reflective and poetic" (Schonmuller, B., 2008:13) and one of its major themes is nationality and identity. The narrative is an account of the gradually revealed histories of four people living in an Italian villa at the end of World War II. The characters are the mysterious and critically burned English patient of the title, a Canadian army nurse called Hana, David Caravaggio, an Italian thief, and an Indian sapper, nicknamed Kip, belonging to the British Army. Each of them is far away from home, displaced by the war, and though they come from different and conflicting countries, they are able to live together in the villa and get on well in spite of their national and cultural differences. The English Patient focuses on the personal experiences of war of the four main characters, who have been deeply wounded by a conflict based on national divisions (Woodcock, J., 2006: 51). It also explores the effort of the characters, particularly that of the patient and of Kip, to transcend the constrictions of nationhood. However, they are ultimately helpless and unable to do so because of the greater power of politics, government, and the war that surrounds them, which shatter their belief that a person can be separated from his or her nationality. In the novel, Ondaatje uses several motifs and symbols that contribute to develop the issue of nationhood and its impact on people's identity and relationships. The war, the desert and the abandoned villa, the maps, together with symbols like the patient's burned body and the atomic b**b dropped on Japan, all help to explain and demonstrate the devastating consequences of disuniting humankind because of their national origins. ...read more.

Alm�sy remembers the vaccination scar on Katharine's arm and immediately envisions her as a child getting a shot in a school gymnasium. Caravaggio looks at Hana's serious face and knows that she looks that way because of the experiences that have shaped her. Understanding the bodies of the different characters is a means of drawing maps, a way of getting closer to the experiences that have shaped&dash;and been shaped by-identity. Bodies also function as a means of physical connection between people, tying individuals to certain times and places. When looking at instances of body imagery in the novel, it is important to pay close attention not only to the words used, but also to the reactions and observations of the other characters to the bodies of others. How is adultery addressed in the novel? Do the characters feel shame about their adultery? Why or why not? Answer for Study Question #3 Though the love affair between Katharine and Alm�sy is illicit, this illicitness is not the primary focus of their relationship. Passion and obsession overwhelm them, causing them to block out the outside world and its rules of right and wrong. Alm�sy does sometimes have glimpses of the reality of his actions, and admits that he and Katharine are "sinners in a holy city." Nonetheless, he does not ever show remorse over their deception or betrayal of Geoffrey. Alm�sy cares only about possessing Katharine, and she alone occupies all his thoughts. Katharine shows a similar lack of regret for hurting her husband. When she finally breaks off the affair with Alm�sy, she cites the fact that "he won't ever change" and that Geoffrey will go mad. Aside from that admission, however, she does not seem to worry about the consequences of her adulterous liaisons. She, too, is largely overcome and overwhelmed by passion. The adulterous nature of Alm�sy and Katharine's affair, then, is merely incidental to the nature of their love. ...read more.

Similarly, in Ondaatje's novel they are transformed into the nuclear bombing of Japan. Said explains that "[a]pparently benign Orientalising ethnocentrism becomes b****y, repressive ethnocentrism, violent positing action of 'the West' which works to assert its plenitude through caricature, suppression, or obliteration of the other" (Said 1978:180-2, my italics). Imperialism and capitalism also necessitate finding new markets and guarding them militarily. The colonised races are the consumers of these new markets, and they have to be guarded from competitors by all means. The nuclear bombing of Japan invokes Said who maintains that Europe's "role in the non-European world was to rule, instruct, legislate, develop, and at the proper times, to discipline, war against, and occasionally exterminate non-Europeans" (Eagleton et al. 1990:72, my italics). Further, Kip's questions suggest that history is written by the strong. Historians can/have depict(ed) the colonised races negatively. The power of the printing presses helps them promote the stereotypes and myths the colonisers generate about the subject races. It also helps them promote a discourse aimed at legitimising to the world the inhuman practices colonisation inflicts on the colonised races. In addition, the association between war and "cricket" suggests that the colonisers enjoy these wars as if they are games. It also implies the frequency of these wars. In both cases, the value of the life of the colonised races is undermined substantially. Kip's words demonstrate to what lengths the colonised might go, sacrificing their life for the colonisers in the hope of being admitted into their camp. In The English Patient all wars prove to be the same. Ondaatje links the Medieval wars with those fought in Italy in 1943-44. The same towns "had been battled over since the eighth century", and "if you dug deep beneath the tank ruts, you found bloodaxe and spear" (p.69). To Ondaatje, past events remain 'alive', and history repeats itself. The idea of modern wars being similar to past ones is echoed in Field Marshal Kesselring's idea of "pouring hot oil from battlements" (p.69). The expertise of Medieval scholars is also used though they "kept forgetting the invention of the airplane" (p.69). ...read more.

With deep insight into both the novel and fundamental issues of nationality, the essay writer skillfully merges quotations from the text with aptly chosen comments from other sources.

Sentence and paragraph construction are well constructed, with only a few errors in punctuation and grammar.