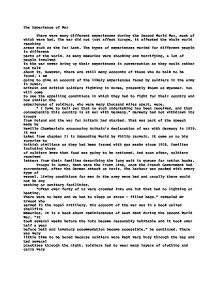 The Experience of War.

The Experience of War There were many different experiences during the Second World War, most of which were bad. The war did not just affect Europe, it affected the whole world reaching areas such as the Far East. The types of experiences varied for different people in different parts of the world. As many memories were shocking and terrifying, a lot of people involved in the war never bring up their experiences in conversation as they would rather not talk about it. However, there are still many accounts of those who do talk to be found. I am going to give an account of the likely experiences faced by soldiers in the army in Dover, Britain and British soldiers fighting in Burma, presently known as Myanmar. You will come to see the appalling conditions in which they had to fight for their country and how similar the experiences of soldiers, who were many thousand miles apart, were. " I have to tell you that no such undertaking has been received, and that consequently this country is at war with Germany." Germany had not withdrawn its troops from Poland and the war for Britain had started. That was part of the speech made by Neville Chamberlain announcing Britain's declaration of war with Germany in 1939. ...read more.

I know this because James Palmer, fighting in Burma with the Royal Tank Division during the Second World War felt forgotten about. His account is on the Mentor Series: World War Two. However, this changed when Lord Mountbatten made sure that the British people knew what was going on in Burma. The Japanese were better at jungle fighting according to the National Army Museum. And as it was easy to get lost in the jungle, many British soldiers were scared of jungle warfare until they were trained properly. Soldiers on the way to Burma who were trained in the skills required for guerrilla operations were instructed in the use of explosives for demolition and sabotage, particularly lines of communication. They spent time in practising shooting with a pistol and were taught how to kill silently with a knife or bare hands. Security was always stressed by instructors, for example a safe house would have a back door. The soldiers learnt many interesting and useful skills including how to read upside down. I found out about army training for Burma from the National Army Museum and the Mentor Series under the category of 'Training for Jungle Ops' by Derek Headly who was trained before going to Burma. "The Japs wouldn't leave us alone. ...read more.