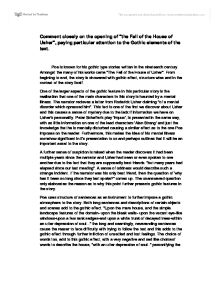 The Fall of the House of Usher - Edgar Allen Poe

Comment closely on the opening of "the Fall of the House of Usher", paying particular attention to the Gothic elements of the text. Poe is known for his gothic type stories written in the nineteenth century. Amongst the many of his works came "The Fall of the House of Usher". From begining to end, the story is showered with gothic effect, structure wise and in the context of the story itself. One of the larger aspects of the gothic feature in this particular story is the realisation that one of the main characters in this story is haunted by a mental illness. The narrator recieves a letter from Roderick Usher claiming "of a mental disorder which opressed him". ...read more.

"but many years had elapsed since our last meeting". A sense of oddness would describe such a strange incident. If the narrator was his only best friend, then the question of 'why has it been so long since they last spoke?" comes up. The unanswered question only elaborates the reason as to why this point further presents gothic features in the story. Poe uses structure of sentences as an instrument to further impose a gothic atmosphere to the story. Both long sentences and descriptions of certain objects and scenes add to the gothic effect. "Upon the mere house, and the simple landscape features of the domain- upon the bleak walls- upon the vacant eye-like windows-upon a few rank sedges-and upon a white trunk of decayed trees-within an utter depression of soul..." ...read more.

The irony of this is that the house is a metaphorical representative of Usher himself and the bloodline of the Usher family. "House of Usher'- an appellation which seemed to include, in the minds of the peasantry who used it, both the family and the family mansion". The idea that the house is somewhat dependant on the lives in it causes a very suspicious and gothic image to the situation. Which is later in the story accentuated by the fact that the house collapses after the death of Usher and his sister. The whole story is paraded with a large impact of gothic atmosphere inflicted by Poe and the techniques he uses to manipulate the effects of the story. Even the title is used as a pun, representing both the house as a building and housee as the family. ...read more.