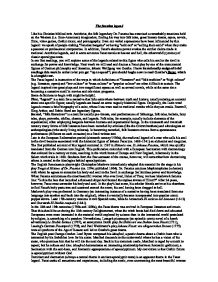 The faustian legend Like his Christian biblical twin Antichrist, the folk legendary Dr. Faustus has exercised a remarkably tenacious hold on the Western (i.e. Euro-American) imagination, finding his way into folk tales, great literary drama, opera, novels, films, video games, Gothic music, and p*********y. Even our verbal expressions have been influenced by this legend: we speak of people making "Faustian bargains" or having "sold out" or "selling their souls" when they make a personal or professional compromise. In addition, Faust's absolute power evokes the similar claims made in medieval Antichrist legends, and in some accounts Faust travels to heaven and h**l, the otherworldly journey of classic apocalypse texts. In our first readings, you will explore some of the legends related to this figure who sells his soul to the devil in exchange for power and knowledge. Next week we will read and discuss a Faust play by one of the monumental figures of German philosophy and literature, Johann Wolfgang von Goethe. ...read more.

an alchemist and magician. The first published account of this legend occurred in 1587 in Historia von. D. Johann Fausten, which was quickly translated from the German into English. This publication coincided with a European fascination with demonology that endured for a century or more, resulting in the witch hunts of Europe and New England, infamously in the Salem witch trials in 1692. Students from the first semester of the course, however, will remember how demonizing others is central to the ideologies behind apocalypticism. The English Renaissance playwright Christopher Marlowe immediately adapted this material for the stage in his play Tragical History of Dr. Faustus (ca. 1594; published 1604). Dr. Faustus conjures Mephistopheles (a demon) with whom he agrees to surrender his body and soul to the Devil in exchange for limitless power and knowledge. When Faustus summonses the most beautiful woman who ever lived, Helen of Troy, we hear Marlowe's famous line: "Is this the face that launched a thousand ships/And burned the topless towers of Illium?" ...read more.

Back in his mountain castle, Manfred is urged by a monk to repent, but he refuses and dies. Manfred demonstrates an interesting relationship between Romantic gothicism, a fascination with the anti-hero, and Romantic appropriations of apocalypticism. My conviction is that Gothic fiction is apocalypticism without God. Eroticism and damnation (always a central theme in ancient apocalyptic texts) is an apparent theme in the Faust legend. Faust seeks all sensations and experiences, including the erotic, even summoning the most beautiful woman ever to have lived, Helen of Troy. In the 19th century the Faust legend became fused with the legend of Don Juan, the womanizer whose exploits are brought to a dramatic end when a statue comes to life and drags him down to h**l. This narrative, like that of Faust, found its way into poetry, drama, and opera Ingrid Shafer's Web essay (see below) provides a very engaging and thorough discussion of precursors to Goethe's Faust. The English Faust Book is the Renaissance translation of the German book that provided the foundation for Marlowe's play. German fascination with this theme is also evident in Friedrich Wilhelm Murnau's film treatment earlier in the 20th century. ...read more.