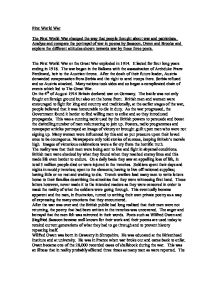 The First World War changed the way that people thought about war and patriotism. Analyse and compare the portrayal of war in poems by Sassoon, Owen and Brooke and explore the different attitudes shown towards war by these three poets.

First World War The First World War changed the way that people thought about war and patriotism. Analyse and compare the portrayal of war in poems by Sassoon, Owen and Brooke and explore the different attitudes shown towards war by these three poets. The First World War or the Great War exploded in 1914. It lasted for four long years ending in 1918. The war began in the Balkans with the assassination of Archduke Franz Ferdinand, heir to the Austrian throne. After the death of their future leader, Austria demanded compensation from Serbia and the right to send troops there. Serbia refused and so Austria attacked. Many nations took sides and so began a complicated chain of events which led to The Great War. On the 4th of August 1914 Britain declared war on Germany. The battle was not only fought on foreign ground but also on the home front. British men and women were encouraged to fight for king and country and traditionally, at the earlier stages of the war, people believed that it was honourable to die in duty. As the war progressed, the Government found it harder to find willing men to enlist and so they introduced propaganda. This was a cunning tactic used by the British powers to persuade and boost the dwindling number of men volunteering to join up. Posters, radio programmes and newspaper articles portrayed an image of victory or brought guilt upon men who were not signing up. Many women were influenced by this and so put pressure upon their loved ones to be courageous. Newspapers only told stories of success, keeping Britain's morale high. Images of victorious celebrations were a far cry from the horrific truth. The reality was that their men were being sent to live and fight in abysmal conditions. British men were shocked by what they found when they reached enemy lines and this made life even harder to endure. ...read more.

The men discover the gas and then it is almost as if the realisation only hits them a second later. They then shout the word a second time as they have woken from their 'fake sleep' to warn each other and then they have to put their gas masks on quickly. The men fumble as the helmets are clumsy and heavy and the men are in a panic. One of the soldiers did not manage to put his helmet on in time and so the gas begins to kill him. Owen describes his horror as he watches the desperation of the dying man. The following simile creates an image of the man struggling to move or to stay upright and compares the gas to fire or lime. "And flound'ring like a man in fire or lime. . . ." Owen is disturbed as he sees him drowning in the deadly gas. He then takes the metaphor one step further and describes the soldier as drowning 'under a green sea,' due to the green colouring of the gas. The following two lines of the poem are then separated from the rest as the poet relives the sight of the helpless man in his dreams. He pictures this image and this is a stark reminder that he wasn't able to assist him and watched him die. In the final stanza, the tone changes once again and the reader is asked to imagine how it would feel to pace behind the wagon that the dying man was 'flung' in. Owen also uses the semantic field of the senses, as he did in the first stanza, as he asks the reader to; watch the rolling eyes of the man; hear the froth come gargling from his lungs; and also uses taste as he uses the words 'tongue' and 'bitter.' As the poem comes to a close, Owen changes the tone for the last time as he directs the poem to the reader. ...read more.

He detailed how the soldiers felt, what they saw and the physical effects that the war had on them. Owen used this tactic of graphic description to shock his readers. His poems were often long and detailed. Siegfried Sassoon also held negative thoughts about the war however his strategy was to show how the men in charge were incompetent and unable to lead. His poems were sarcastic and showed his hatred towards the generals and the majors. He wrote his poems in a short, direct style. Rupert Brooke's views were very different to Owen and Sassoon's. His poems were patriotic and he tried to encourage men to go to war. Brooke felt that it was an honour to die for England and that he would be remembered forever if he was killed fighting for his country. Brooke used imagery to describe the love he felt for his country. The poems studied have demonstrated different attitudes to war. The poets wrote their pieces during the same period and the theme was the same (war) however, their views and attitudes were very different. Each poet has a powerful effect on the reader as their poems have a persuasive influence. Owen wanted the reader to empathise with the soldiers, Sassoon wanted the reader to hate the men in authority and Brooke wanted the reader to feel proud to be English. Today, these poems are used across the country to enable young people to understand the atrocities of war. They are viewed as an essential tool to educate people to comprehend the consequences if there was ever to be another war. They show different attitudes in order to give a variety of views and to provide as honest a picture as possible. They also enable people to remember the war so that hopefully any further wars can be prevented in the future. Owen, Sassoon and Brooke are invaluable assets to English history as the have provided detailed accounts of a life that we will hopefully never need to encounter again but need to be reminded of in order to avoid its repetition. ...read more.