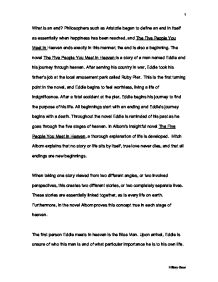 the fivepeople you meet in heaven analysis

What is an end? Philosophers such as Aristotle began to define an end in itself as essentially when happiness has been reached, and The Five People You Meet in Heaven ends exactly in this manner; the end is also a beginning. The novel The Five People You Meet in Heaven is a story of a man named Eddie and his journey through heaven. After serving his country in war, Eddie took his father's job at the local amusement park called Ruby Pier. This is the first turning point in the novel, and Eddie begins to feel worthless, living a life of insignificance. After a fatal accident at the pier, Eddie begins his journey to find the purpose of his life. All beginnings start with an ending and Eddie's journey begins with a death. Throughout the novel Eddie is reminded of his past as he goes through the five stages of heaven. In Albom's insightful novel The Five People You Meet in Heaven, a thorough explanation of life is developed. Mitch Albom explains that no story or life sits by itself, true love never dies, and that all endings are new beginnings. When taking one story viewed from two different angles, or two involved perspectives, this creates two different stories, or two completely separate lives. ...read more.

When Marguerite passed Eddie was sure that he would never love again, and this is considered true within the certain love that will never end. Marguerite is Eddie's fourth person he meets in heaven, and his love is unconditionally still evident when Albom writes: "Her dark hair fell over one eye and Eddie's heart nearly burst. His lips took a moment to part, and the sound from the back of his throat took a moment to rise, but they came together in the first letter of the only name that ever made him feel this way... 'Marguerite'" (Albom, page 150). This shows that Eddie's love for Marguerite is still very strong, as this is the first time he is seeing her since her death at the age of 47. Eddie's emotions at this time can simply be summarized into a single word: speechless. As the reader is shown that Eddie is unable to say anything other then her name, it is very informative in the explanation of his passionate love towards her. This also relates to the feelings he was having when he first laid eyes on her. This shows that even decades later, the love he feels for her never died it just took a different form when her physical appearance no longer existed. ...read more.

As time moves forward, yesterdays end, and present days begin, this is an essential part of life, as are sacrifices. Progression in life would not be possible without this, as for something must end to create a new beginning. Through the development of themes such as the connectedness of life, true love is never lost, and all endings are also beginnings Mitch Albom was able to create an inspirational novel that brings a new meaning to life. As Eddie journeyed through the five stages of heaven he learnt what he did not learn on earth, and made sense of his yesterdays. By the Blue Man and Tala's death, Eddie was able to live and protect young children who ride the attractions at the pier. As Marguerite passed, Eddie's love still remained strong, as did his father's love towards him during their period of silence. Through sacrifices and time, Eddie was able to progress with his life and begin new chapters such as his job at the pier. As Eddie made sense of his time on earth an indescribable peace overcame him, and this is the essential purpose of heaven that Albom presents. As people search for peace in their lives they are only continually impairing their time, as peace will not be found by worrying. Reflecting upon your life as it happens is an "epidemic" that has consumed the human population and letting go of it itself is the only cure. ?? ?? ?? ?? 1 Hillary Geer ...read more.