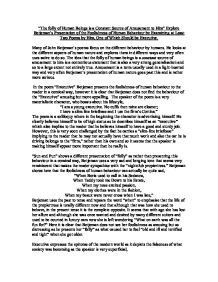 The folly of Human Beings is a Constant Source of Amusement to Him Explore Betjeman(TM)s Presentation of the Foolishness of Human Behaviour by Examining at Least Two Poems by Him, One of Which Should be Executive.

Here it is clear that Betjeman does not see her foolishness as amusing but as distressing as he presents her "folly" as what caused her to feel "old and ill and terrified and tight" when she got older. Executive expresses the epitome of the modern world as it depicts the falseness of what society was becoming as the speaker is very superficial, "I've a scarlet Aston Martin- and does she go? She flies!" Owning as Aston Martin would be a luxury, however having it in the colour red shows vulgarity as it is a very tacky colour in which to own a sports car. It is very vibrant and so it also shows that the Executive does not want to hide his wealth but wants everyone to know about it as he is also describing the speed at which he can travel. He clearly has no sense of humility and does not wish to be modest about what he has. He comes across to the reader as very pretentious and just emphasises how foolish he is for being so shallow. ...read more.

Betjeman does show comedy within the stanza, "The ashtrays were unemptied The cleaning unattempted, And a squashed tomato sandwich on the floor." Betjeman shows that the propiertress has a lot of work to do and that her life is a struggle, this is made amusing and comic by Betjeman's use of bathos at the end of the stanza. This makes the stanza more light-hearted which is a contrast to the disheartening penultimate and last stanza when she is questioning what the point of it all was. At the beginning of the poem, the reader is given the impression that the propiertress is a figure of amusement; however as the poem finishes it is clear that although there may be comic elements ultimately the propiertress' foolish antic when she was younger has let to depressing circumstances and the reader feels more empathetic rather than amusement. Overall, it is clear that the folly of human behaviour does not proved a constant source of amusement to Betjeman because it is clear that the behaviour that he does talk about with satire is not for amusement but what he sees as generally appalling and foolishness leading to greater distress in the future. ...read more.