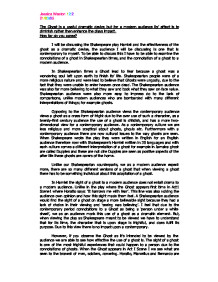 The Ghost is a useful dramatic device but for a modern audience its' effect is to diminish rather then enhance the plays impact. How far do you agree? I will be discussing the Shakespeare play Hamlet and the effectiveness of the ghost as a dramatic devise, the audience I will be discussing is one that is contemporary to myself. To be able to discuss this I have to be able to examine the connotations of a ghost in Shakespearian times, and the connotation of a ghost to a modern audience. In Shakespearian times a Ghost lead to fear because a ghost was a wondering soul left upon earth to finish its' life. Shakespearian people were of a more religious nature and were lead to believe that Ghosts were ungodly, due to the fact that they were unable to enter heaven once dead. The Shakespearian audience was also far more believing to what they saw and took what they saw on face value. Shakespearian audience were also more easy to impress do to the lack of comparisons, unlike modern audiences who are bombarded with many different interpretations of things; for example ghosts. ...read more.

Due to this view there is no impact upon a contemporary. However, if you observe the Ghost as it's intended to be viewed by the audience we are able to see how effective the use of a ghost is. The sight of a ghost is one of the most frightful experiences that could happen to a person due to the connotations of ghosts. When the Ghost appears in Act I Scene I we see what are seen to the bravest of men, soldiers, cowering. Horatio, Marcellus and Bernardo are wrapped in fear when they come in contact with the Ghost. When these men describe themselves as 'harrowing with fear' it gives a contemporary audience a better understanding because of a similarity in thought that both audiences assume soldiers to be, even for a contemporary audience we understand that if admirable and brave men are scared that we should also be. In act 1 scene 4 the use of the ghost for dramatic purpose changes. The ghosts' appearance is no longer to shock the audience; his use is now has a more psychological fear role, I think it is left open ended and makes he audience. ...read more.

Yet the actions, which in succession to his appearance occur, make the character of the ghost a very useful dramatically because without him there would be no storey, the revenge tragedy would not take place without the information that the ghost gives hamlet to seek his revenge against his uncle, which then due to his madness subsequently leads on to the deaths of others for instance: Polonius and Ophelia. Therefore I feel that the ghost is a useful dramatic device to a contemporary audience it may not entail as much fear due to the lack of connotation it now has to a modern audience, this slightly diminishes the characters ominous presents however when then viewing the play 'Hamlet' as it was written we see how the character of the ghost enhances the play. A modern audience who believes that the ghost only demolishes the dramatic tension should then see him as a dramatic catalyst. There are many ways in which the ghost can be seen but I think that as a character he enhances the plays impact due to how much control his actions to seek his revenge has ruined so many lives. Word count: 1203 ?? ?? ?? ?? Jessica Weston 12:2 21/03/05 ...read more.