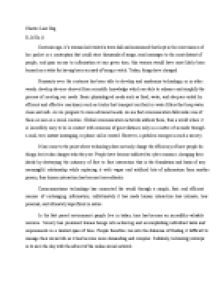 The Good and Bad of Modern Technology

﻿Chester Liao Ong R-26 En 11 Centuries ago, if a woman had visited a town hall and announced that kept in the convenience of her pocket is a contraption that could store thousands of songs, send messages to the most distant of people, and gain access to information at any given time, this woman would have most likely been burned on a stake for having been accused of being a witch. Today, things have changed. Humanity over the centuries has been able to develop and modernize technology, or in other words, develop devices derived from scientific knowledge which are able to enhance and simplify the process of meeting our needs. Basic physiological needs such as food, water, and sleep are aided by efficient and effective machinery such as trucks that transport our food or water filters that keep water clean and safe. As we progress to more advanced needs, we see that communication falls under one of these as man is a social creature. Global communication networks address these, thus a world where it is incredibly easy to be in contact with someone of great distance only in a matter of seconds through e-mail, text, instant messaging, or phone call is created. ...read more.

Facebook is a magnificent phenomenon that was formed due to the creation of the World Wide Web. Adding and staying connected to friends has become remarkably easy nowadays as most if not all people are in possession of a Facebook account. It allows its users to establish and build upon personal profiles that contain their own photos, videos, preferences, and individual information. All of which can be viewed by others where they can comment on an occasional status update, explore a friend?s liked page, or simply write on his or her wall. Facebook has become a wonderful place to keep in touch with new friends, and at the same time, help in finding old ones. Being able to discover and reconnect with old friends through a search engine has become a noteworthy aspect of Facebook. It has turned the often long, onerous, and frustrating process of locating a long lost friend into one that can be accomplished in a mere matter of minutes. Millions of people worldwide are able to rebind past relationships whether it be with friends, colleagues, or separated family members. ...read more.

The pictures and photos that one uses to capture his or her most notable moments in life has turned into something of which he or she can brag and show onto others. This further encapsulates the ideology of sharing, not just because one had an experience, but because one needs to have an experience to show onto others. Individuals have turned into beings who would like to present themselves onto others in the very best way. They have in fact become intimate with themselves instead of others. Conversation for mere connection. Actually being lonely We become lonely in the inside as people lose the capability to understand and identify with one another further disrupting their ability for self-reflection. Point 1 Loneliness in facebook Positive- help common strands unites us Negative ? Quantity vs quality Technology has taken us to places, but it is a place we want to go? Albert Einstein had once said ?I fear the day when the technology overlaps with our humanity. The world will only have a generation of idiots.? Some people argue that modern technology is creating a single world culture; their counterparts say that telephones, email, etc. have made communication between people less personal. Evaluate the quality of modern technology and its affect on our lives. http://www.lexiophiles.com/english/the-influence-of-modern-technology-on-society-good-or-bad http://www.studymode.com/essays/Evaluation-Essay-Of-Facebook-454118.html http://www.theatlantic.com/magazine/archive/2012/05/is-facebook-making-us-lonely/308930/ ...read more.