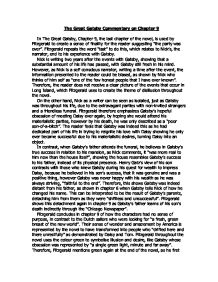 The Great Gatsby Commentary on Chapter 9

The Great Gatsby Commentary on Chapter 9 In The Great Gatsby, Chapter 9, the last chapter of the novel, is used by Fitzgerald to create a sense of finality for the reader suggesting "the party was over". Fitzgerald repeats the word "last" to do this, which relates to Nick's, the narrator, end to his experience with Gatsby. Nick is writing two years after the events with Gatsby, showing that a substantial amount of his life has passed, with Gatsby still fresh in his mind. However, as Nick is a self conscious narrator, writing a time after the event, the information presented to the reader could be biased, as shown by Nick who thinks of him self as "one of the few honest people that I have ever known". Therefore, the reader does not receive a clear picture of the events that occur in Long Island, which Fitzgerald uses to create the theme of disillusion throughout the novel. ...read more.

Henry Gatz's view of his son contrasts with those who knew Gatsby during his quest for wealth to impress Daisy, because he believed in his son's success, that it was genuine and was a positive thing, however Gatsby was never happy with his wealth as he was always striving, "faithful to the end". Therefore, this shows Gatsby was indeed distant from his father, as shown in chapter 6 when Gatsby tells Nick of how he changed his name. This can be interpreted to be the result of Gatsby's parents, detaching him from them as they were "shiftless and unsuccessful". Fitzgerald shows this detachment again in chapter 9 as Gatsby's father learns of his son's death indirectly through the "Chicago Newspaper". Fitzgerald concludes in chapter 9 of how the characters had no sense of purpose, in contrast to the Dutch sailors who were looking for "a fresh, green breast of the new world". ...read more.

So, like the Dutch sailors, Fitzgerald mentions throughout the novel, Nick's wonder and amazement of Gatsby creates a sense of purpose, unlike the rest of the characters, prompting him to write the account. On the other hand, Gatsby is represented to have dreams and desires, causing him to dedicate his life to the purpose of rekindling his love with Daisy. Fitzgerald concludes at the end of the chapter how Gatsby "believed in the green light, the orgastic future" prompting Nick to reflect Gatsby and create his own dedication in writing the account of his experience, owing it to Gatsby's life. Fitzgerald again emphasises the Dutch sailors' "boats against the current, borne back ceaselessly into the past". This is shown to reflect Gatsby and his determination to "borne back" to the past in order to be with Daisy again, however, like the "boats against the current" time prevents Gatsby from fulfilling his dreams. ?? ?? ?? ?? ...read more.