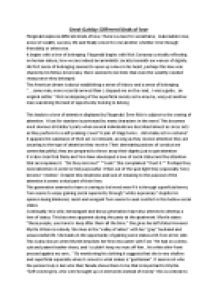 ﻿Great Gatsby: Different kinds of love Fitzgerald explores different kinds of love. There is a love for social fame, materialistic love, a love of wealth, success, life and finally a love for one another whether it be through friendship or otherwise. It begins with a love of belonging. Fitzgerald begins with Nick Carraway cynically reflecting on human nature, how we are indeed an animalistic society beneath our veneer of dignity. His first sense of belonging seemed to open up a love in his heart, perhaps this love was shared by his fellow Americans, there seemed to be hints that even the wealthy needed reassurance they belonged. The American dream is about establishing a sense of history and a sense of belonging. ?....some man, more recently arrived than I, stopped me on the road...I was a guide...an original settler.? Nick as despising of the superficial society as he may be, was just another man wandering the land of opportunity looking to belong. This leads to a love of attention displayed by Fitzgerald. Even Nick is subject to the craving of attention. A l**t for stardom is portrayed by many characters in the novel. This becomes most obvious at Gatsby?s party when several individuals are described almost as circus acts as they perform to a self-praising crowd ?A pair of stage twins....did a baby act in costume?. ...read more.

It seems that he is not blinded by fortune and superficialities but feels emotions honestly and purely. Yet his love is submissive, self sacrificing, that certainly doesn?t seem to bring him much joy. There is a sense of Gatsby blinded by love. It seems Gatsby is totally in love with the girl he met before the war, but it seems he is more in love with the idea of Daisy rather than the real person. For so long he has built on the dream of having her again but his dreams have grown so much it is impossible for Daisy to be enough to satisfy his dream ?Daisy tumbled short of his dreams ? not through her own fault, but because of the colossal vitality of his illusion.? Gatsby is clearly insecure about himself, it appears he feels only superficialities can buy Daisy?s love ?He?s afraid, he?s waited so long....... he wants her to see his house.? He doesn?t think himself good enough for Daisy, perhaps because of the truth behind the man he really is? It seems dreams are the only thing to keep happiness in the 1920?s ?there are only the pursued, the pursuing, the busy and the tired.? But what happens to the love of dreams when those dreams become unrealistic? ...read more.

myself but I always come back and in my heart I love her all the time.? Fitzgerald has made Tom show emotion towards Daisy for one of the first times in the novel, this may be Fitzgerald exposing Tom?s manipulative tactics over maintaining power. The end of the novel portrays a powerful philosophical message, one that opens one?s eyes to the things that really matter. It shows the reader that perhaps they are all just victims of wealth. Fitzgerald displays that nothing is lasting and life goes on. ?so we beat on, boats against the current, borne back ceaselessly into the past.? We are constantly fighting to move on with life, to continue towards our future, while simultaneously trying to let go of the past. Gatsby?s lifelong journey to transcend his past was ultimately ineffectual, as a reflection of many who have tried to reach the American dream. The Ice Palace also reflects this; ?she cries with delirious, unrestrained passion- Tomorrow! Tomorrow! Tomorrow!? We still hold on to the hope that tomorrow is a new beginning full of the promises of achieving our dream; whatever it may be. The powerful moral maxim we are left with is one should never give up on what they truly believe in; what they truly want. Dreams are what keep us going, without them what do we have? ...read more.