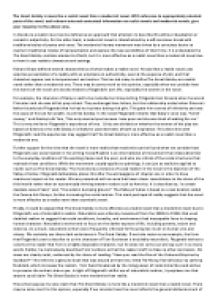 to a genuine book that was around at that time, titled The Rising Tide Of Colour by Lothrop Stoddard, which increases the realism. Tom feels threatened by the rising power of racial minorities and wishes to preserve the archaic status quo. In light of Fitzgerald?s skilful use of naturalistic realism, it perplexes me that anyone could claim The Great Gatsby is more modernist than realist. Those that oppose my view claim that The Great Gatsby is more like a modernist novel than a realist novel. There may be some merit to this opinion, especially if we consider how the novel reflects the general disillusionment of society. Modernist novels have an interest in themes of loss, disillusionment and social alienation. Fitzgerald was writing in the aftermath of the First World War and was part of the ?lost generation.? Both Gatsby and Nick too part in the First World War, and Gatsby says, ?Then came the war, old sport. It was a great relief, and I tried very hard to die.? Society was coming to terms with the true destructive nature of humanity and this cynicism is evident in Fitzgerald?s writing. These themes of disillusionment are clear in the life and character of Gatsby himself. Gatsby appears to be the embodiment of this dream ? he has risen from being a poor farm boy with no prospects, to being rich, having a big house, servants, and a large social circle attending his numerous parties. ...read more.

They detail a society that was becoming increasingly less interested in religion, the so called ?death of God? that took place during the twentieth century with the rise of militant atheists such as Stalin and Mao. In modernist novels the loss of meaning in human existence (called by psychologists the ?loss of ontological ground?) has made of our world a moral wasteland in which there is no God, no universal plan, and no real rules for living an upright or successful life. The world is unfair, and men suffer. In The Great Gatsby such an outlook is clearly displayed by George Wilson: ?he was looking at the eyes of Doctor T. J. Eckleburg ? ?God sees everything,? repeated Wilson.? Traditional religious values have been disregarded and replaced by the god of materialism. Throughout The Great Gatsby very little mention is made of God and religious affairs, fitting the modernist outlook and proving that the novel is more modernist than realist. To conclude, after careful consideration we determine that although the novel is highly effective in both genres, ultimately it is more effective as a realist novel than a modernist novel. The settings and characters presented are extremely realistic, and despite the cynicism present in the narrative, there is a faint gleam of hope that prevents it from being fully modernist. The opposing arguments have some merit but ultimately they fail to realise the true implications and context of The Great Gatsby. ...read more.