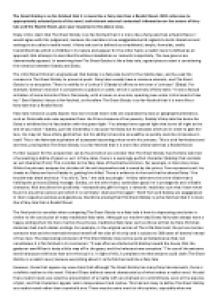 The Great Gatsby is so far-fetched that it is more like a fairy-tale than a Realist Novel. With reference to appropriately selected parts of the novel, and relevant external contextual information on the nature of fairy tale and the Realist Novel, give your response to the above view.

For example, in the original version of The Little Mermaid, the prince marries someone else and the mermaid throws herself off the side of his ship and is subject to 300 years of slavery instead of true love. The depressing conclusion of The Great Gatsby may not be quite as fantastical as that, but nonetheless it is far-fetched in its conclusion: ?It was after we started with Gatsby toward the house that the gardener saw Wilson's body a little way off in the grass, and the holocaust was complete.? The use of the extreme word holocaust reinforces how over the top it is. In light of this, it perplexes me that anyone could claim The Great Gatsby is a realist novel, because everything about it so far-fetched and like a fairy tale. However, those that oppose my view claim that although The Great Gatsby has many fairy tale elements, there is a definite realism to the novel. Richard Chase defined several characteristics of what makes a realist novel. He said that a realist novel uses selective presentation of a reality with an emphasis on verisimilitude, even at the expense of plot, and that characters appear real in temperament and motive. This has led many to define The Great Gatsby as a realist novel rather than a symbolic one. ...read more.

If we take r****m as an example, the form that Fitzgerald uses to describe to us the character of Tom Buchanan is decidedly naturalistic. Fitzgerald wishes to convince the reader that Tom is a highly despicable character, but he does not come out and say such in so many words. Rather, he meticulously describes Tom?s actions so that the reader is left to draw no other conclusion. His views are clearly r****t, evidenced by his choice of reading: ?Have you read the Rise of the Coloured Empires by Goddard?? This refers to a genuine book that was around at that time, titled The Rising Tide Of Colour by Lothrop Stoddard, which increases the realism. Tom feels threatened by the rising power of racial minorities and wishes to preserve the archaic status quo. Fitzgerald?s skilful use of naturalistic realism would suggest that The Great Gatsby is more effective as a realist novel rather than a symbolic novel. To conclude, after careful consideration we determine that The Great Gatsby is so far-fetched that it is more like a fairy-tale than a Realist Novel. However, it is undeniable that it has realistic and convincing characters, situations and events as well as having fairy-tale elements. I believe that the fairy tale elements are more apparent throughout the text. The opposing arguments have some merit but ultimately they fail to realise the true implications and context of The Great Gatsby. ...read more.