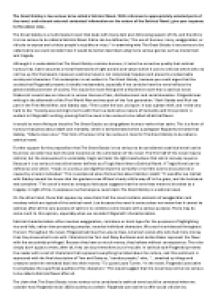 The Great Gatsby is too serious to be called a Satirical Novel. With reference to appropriately selected parts of the novel, and relevant external contextual information on the nature of the Satirical Novel, give your response to the above view.

Transfer-Encoding: chunked ﻿The Great Gatsby is too serious to be called a Satirical Novel. With reference to appropriately selected parts of the novel, and relevant external contextual information on the nature of the Satirical Novel, give your response to the above view. The Great Gatsby is a multi-faceted novel that deals with many dark and distressing aspects of life, and therefore it is too serious to be called a Satirical Novel. Satire can be defined as, ?the use of humour, irony, exaggeration, or ridicule to expose and criticise people's stupidity or vices.? In examining why The Great Gatsby is too serious to be called satire we could consider how it would be better described using more serious genres such as modernism and tragedy. Although it is undeniable that The Great Gatsby contains humour, it lacks the corrective quality that satirical humour has. Satire assumes a moral framework of right actions and values which it uses to criticise others who do not live up this framework, however a satirical novel is not completely hopeless and presents a redeemable society and characters. This redemption is not evident in The Great Gatsby, because you could argue that the society that Fitzgerald presents is totally irredeemable, especially if we consider how the novel reflects the general disillusionment of society. ...read more.

On the other hand, those that oppose my view claim that the novel contains elements of exaggeration and mockery which are typical of the satirical novel. Just because the novel is serious does not mean that it cannot be satirical, after all the very purpose of satire is to combine comic means with a serious purpose. There may be some merit to this opinion, especially when we consider Fitzgerald?s characterisation. Satirical characterisation often involves exaggeration, caricature or stock types for the purposes of highlighting vice and folly, rather than presenting complex, rounded individual characters. We see this evidenced throughout the text. Throughout the novel, Fitzgerald satirises the Leisure Class, America's social elite who had more money than they knew what to do with. Characters like Tom and Daisy Buchanan and Jordan Baker represent the flaws with the excessively privileged. Because they have so much money, they behave without consequences. The rules simply don't apply to them; after all, they can buy themselves out of trouble. In satirical style Fitzgerald presents the reader with a cast of characters that represent everything he hated about his culture, and this sentiment is expressed with the final description of Tom and Daisy as, "careless people," who, "...smashed up things and creatures and then retreated back into their money.? To quote Laura Turner, ?In the novel, Fitzgerald uses satire to emphasize the superficial ...read more.

Palmetto, who killed himself by jumping in front of a subway train in Times Square.? The people at Gatsby's parties are not immediately known to him. They are hangers- on, individuals who arrive at his party to stay until they are kicked out onto the next party. The most communal of experiences actually ends up becoming one of the most alienating. This could be considered a satirical mocking of the shallowness of 1920s relationships, suggesting that the novel is not too serious to be considered satire. For Fitzgerald, his use of satirizing Gatsby's party is meant to make a larger statement about the time period of the 1920s. This was not a time period where individuals withdrew to revel in the joy of other people's company. Rather, individuals used this excuse to withdraw further into themselves without any real reflection or introspection about the nature of their own identity. The level of mockery evident in Fitzgerald?s description of the parties suggests that The Great Gatsby is not too serious to be considered a satirical novel. To conclude, although it is true that The Great Gatsby contains elements of satire, it is far too serious in other regards to be called a Satirical Novel. It is impossible to fit The Great Gatsby to any singular genre because it contains elements of so many different genres. The opposing arguments have some merit but ultimately they fail to realise the true implications and context of The Great Gatsby. ...read more.